Standards Based Grading in the Middle School Chemistry Classroom

“Does this count as a grade?” Every year, this question is posed multiple times in my seventh-grade science classroom. Whether it is an inquiry-based activity, a check-in for understanding at the beginning of a lesson, or a written reflection, my seventh-graders want to know if what they do will be accounted for in my paper grade book. This is a telling show of school culture nowadays—the focus seems to be on earning a specific grade rather than on actual learning. With the push of getting into a good college being a motivational factor for students and parents, the end result (i.e., the grade) is shown to be more important than the journey to get there (i.e., the actual learning and understanding). This is apparent more and more, even in the middle school setting.

My goal as a middle school science teacher is to inspire and to create learning opportunities for students. And, because the concept of earning points took students away from that, I happily adopted the middle school science department’s ideology of using standards-based grading. Susan Brookhart, in her 2010 article “Starting the Conversation about Grading,” says it clearly: “Standards-based grading is based on the principle that grades are not about what students earn; they are about what students learn” (1). And even though there are still tweaks to be made (even after four years of doing it), I have noticed a substantial shift in my classes toward actual understanding of subject matter. Furthermore, I feel that the use of standards-based grading is more reflective of what middle school chemistry should be as a whole—a system of trial and error, learning from mistakes, and reapplying information gained from failure to be successful.

How my standards-based grading system works

It’s hard to get students to connect with the new grading system at first. After going through kindergarten through sixth grade, my young scientists come to me already ingrained with the mentality that a good grade is the goal of any classroom environment. What I and the rest of my middle school science colleagues present the students with is unfamiliar and strange. Many of the students complain as soon as they hear I won’t grade using a percentage or total points, and that’s OK. Change doesn’t come across easily, and breaking a mold that students have had for years will cause gripes and groans.

To do this, I explain the grading system only briefly at the beginning of the year. I hand out a sheet that provides an overview of the policy, but I never go into depth about it until I hand back the first graded assessment. I then walk students one by one through the assessment, explaining how grades are earned and asking students to think about what they could be better or why an answer didn’t receive full credit. As a result of this explanation and further grades, by the end of the year students come to accept the system and all that it entails.

Currently, standards-based grading in my classroom is straightforward—for all of the standards that I would like students to master, they can earn a score of 0–4. These standards are detailed and highlight the individual skills and concepts that students should be able to demonstrate by the end of the year. The table below shows the wording I use to convey the evaluation of standards to my students:

Students have many opportunities to be assessed on a standard, and a summative assessment is given that covers a number of standards within a unit. The most recent grade for a standard is always taken, and students have the chance to do a retake assessment of a standard to show that they have learned the material. A student has to have all 3s and 4s to pass the class, and that makes all students work to master the content. This is much preferred to a purely points-based system, where a student can get a low grade, never think about a topic again to learn from his or her mistakes, and still manage to pass the class.

Though standards-based grading can be applied to a variety of subjects, it lends itself well to chemistry because of the nature of the subject. Chemistry is about building on basic principles. Without an understanding of the basic content (for example, the relationship between the motion and attraction of molecules in a substance), students can’t hope to apply principles to natural phenomena. They won’t be able to think critically. And, in terms of applications, a student’s thought process can go astray in many different ways. This struggle is made apparent when a student loses points on an application problem.

For example, let’s say that a student is asked on a quiz why drops of water appear on a humid day on the side of a cold, closed can of soda.  For their answer, they lose half of the points. Because points were deducted, the student knows they did something wrong, but where specifically did they falter in their thought process? Did they think water molecules seeped through the can? Did they get confused between the motion and attraction of water molecules? Did they not define the term condensation? The student doesn’t know what he or she mixed up. And from the teacher’s perspective, the feedback being given is not conducive to student learning. Furthermore, does the grade represent the mastery of a basic concept but not the application of that concept? Standards-based grading changes the perspective, because the question can be scored against a number of standards. In the question above, the teacher may read the answer and determine that the student has mastered the definition of condensation (receiving a 4 for that standard), but their application of condensation to this problem is slightly skewed (receiving a 2 for that standard). As demonstrated, the teacher and the student can now identify where the wrong turn was made, and the student earns credit for the standards that he or she does, in fact, understand.

An example: Ionic and covalent bonding

A topic that I want my students to understand is ionic and covalent bonding. The first step is to set the standards. That requires me to reflect on the purpose of learning ionic and covalent bonding and specify what parts are important for students to understand. The more detailed the standard, the better the feedback to the student. Some examples of detailed standards:

The student should be able to

This could take a lot of time to grade. Some teachers simplify and just set two standards—one for ionic bonding and one for covalent bonding. This is fine, as long as you are very explicit in what you tell students you are looking for in their answers.

Next, I develop the summative assessment (and a retake, just in case) to ensure that these standards are fully covered. I also think about when I can give smaller quizzes that cover only one or two of the standards, so students can track their growth and I can give ample feedback. After those are done, I craft the lessons and formative assessments, making sure that there are multiple formative assessment opportunities for each standard. These formative assessments should be varied so students can showcase their understanding and provide feedback to each other. For example, I have had students complete written and shared responses, but I’ve been creative and have had groups show the steps of ionic and covalent bonding through interpretive dance. 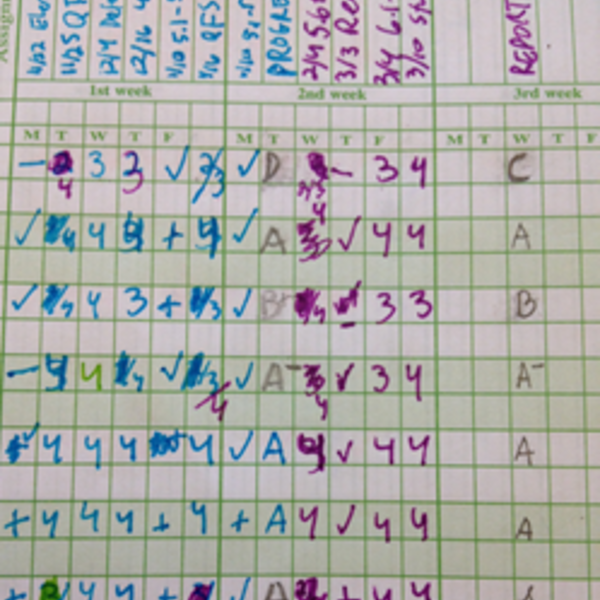 My grade book is a disaster as a result of standards-based grading. Things continuously get scratched out and added in, and every year I think about finally using pencil instead of pen (but never actually do). My fellow colleagues use Excel, Numbers, or other spreadsheet-based applications to keep track of growth. It also allows them to create algorithms for calculating a letter grade for the report card/progress report based on how many standards have been passed—and of those passed, how many 4s are earned compared to how many 3s. I highly recommend either using technology to help track progress, or investing in a pretty large grade book to avoid scratching things out. Many options are out there, and many learning management systems are beginning to adopt standards-based grading policies.

My standards-based grading system for chemistry is constantly evolving and changing. Every year I learn that I omitted a standard, or that perhaps two could be combined into one. An open mind and a fluid transition are necessary for this system to work. This year, I will also be adding some process-based standards (collaboration, presentation skills, etc.), which is important in terms of understanding the nature of scientific work. Before, the standards were all content-based. I may also add lab work and inquiry, so students receive better feedback on their lab skills.

Another common issue I’ve dealt with is fatigue throughout the year. Standards-based grading is a lot of work, and sometimes it seems easier to just give a 0–4 grade on chapter 5. However, standards-based grading is most effective for chemistry when students are given as much specific feedback as possible. Using an electronic grade book will help with this, and it will keep better track of all student work.

Change isn’t always easy, but when changes benefit our students and their mastery of chemistry concepts, they should be implemented. As a result of standards-based grading, I feel that my students’ critical thinking skills have improved, and their ability to apply information to a number of different areas is better. And, I feel that I am serving as a more effective guide and facilitator to create learning opportunities. It’s always nice not to hear students ask for their letter grade.

Michael Chapman Jr. is a seventh-, eighth-, and ninth-grade science teacher at Boston College High School. A 2014 Klingenstein Summer Institute Fellow, Michael's personal educational passions focus around the understanding and application of how people learn, as well as the role of technology in the classroom. Michael graduated from the University of Virginia in 2010 with a B.A. and an M.T., and in his spare time he enjoys reading, visiting lighthouses, and running.