Keys for Success in Teaching Chemistry

There is an interesting short film on YouTube, “Why Man Creates”, that I show my students during the first week of class. This brief animated movie won an Academy Award in 1968 for Best Documentary (Short Subject). I like the movie’s message about where ideas come from: looking at one thing and seeing something else, or simply thinking “what if?”

This same philosophy influences the labs I use in my teaching, which are also fueled by the creativity of many fellow science teachers. I have accumulated these labs over the course of 50 years of teaching, from colleagues I’ve worked with or met at state, regional, and national conferences. A few are even my own original work. But all of us have the ability to be creative and sometimes, when you least expect it, a new idea will develop!

For a few years in the late 1990s, I not only taught chemistry and physics, but also geology. One of my lectures on that subject involved metals, and the ores from which they came. The following summer, while thinking about the upcoming school year, I came up with an idea for a Mineral Lab to present to my students on the first day of school. I started by placing a sample of ore, and a product made from the metal extracted from that ore, into a ziplock bag. For example, I selected a chalcopyrite sample (copper ore) and paired it with copper wire or copper pipe. I chose a magnetite sample (iron ore) to pair with a pair of Vise Grips or pliers. Each bag also contained a metric tape measure, a graduated cylinder, and an overflow can, since some of the ore samples were too big to fit into the graduated cylinder.

The lab informed students that a lode of ore the same size as the classroom itself had been discovered—and the students’ task was to determine how many units of the enclosed product could be made from that lode. I provided them with information regarding the percent of metal in each of the ore samples, and provided electronic balances for each group to use. I allowed any group that had solved the problem to explain to their classmates how to do it, and then let the groups finish collecting the data they needed and complete the lab. It became an excellent way of introducing chemistry and getting them to think about the raw materials used to make the things they take for granted.

Following one’s inspiration is one key to developing new teaching tools. Another is being resourceful. For example, you may be thinking: nice activity, but electronic balances are too expensive! My advice is to be resourceful! For example, check with your local police department to see if they have any balances collected in drug raids that they no longer need for evidence and if so, whether they would donate them to your school. One year, our school district received 24 balances from the police department, and divided them between four high schools. Alternatively, you can pick up balances at pawn shops for $10 to $15.

When I introduce the mole concept, I have my students conduct a Mole Lab to practice calculating the number of moles, atoms, and molecules in a sample of material. I give them containers containing aluminum rivets or nails, copper elbows, water, table salt, baking soda, and sugar — as well as an electronic balance. Then I task them with calculating the quantities in each sample. Students also complete a Mole Food Lab during this unit. My goal in this lab is to encourage students to read labels. The majority of the college students I have in chemistry are on track to enter nursing programs. I ask them “If you have a patient on a sodium-restricted diet, would you serve them tomato juice for breakfast?” Tomato juice, along with foods like cereal, pears, beans, certain yogurts, and even the dietary supplement Ensure®, all contain both sodium and potassium. The students read the labels and determine how much of each food (by both mass and volume) would be needed to obtain one mole of sodium and another of potassium. The goal is to encourage students to realize the connection between the chemistry content and the real-world.

Step 15: Take the small piece of zinc from the zip lock bag and drop it into the HCl.

Step 16: After the reaction has progressed a few minutes, light the candle and bring the candle flame to the top of the test tube.

I also use It’s Time to React, a chemical reaction lab in which students investigate indicators of a reaction, practice how to write a balanced equation based on observation, and identify the type of reaction that occurred. The reactions in this lab include lighting a butane lighter and a candle, combining baking soda and vinegar, and reacting several fairly common chemicals, such as baking soda and dilute hydrochloric acid, or mossy zinc and hydrochloric acid. Steps 15 and 16 of this lab are often the most memorable for most students. The popping sound and the flame shooting down into the test tube when the hydrogen is ignited by the candle flame always bring startled looks to the students’ faces — followed by smiles, and “Let’s do that again!” I always tell them, “Now that is chemistry!”

When we begin studying solutions, I use a Strong and Weak Electrolytes Lab to allow my students to investigate whether a water-based solution contains ionic or covalent bonds, based on its level of conductivity. A low-cost conductivity tester can be made using a light emitting diode from Radio Shack (you can buy two for less than $4), a copper wire, a 9-volt battery, and a battery holder. Students can use this conductivity tester to examine solutions of common household items such as salt, sugar, or baking soda in water.

A big benefit to this lab method is its low cost. Using probeware requires a computer to collect the data, and if a school cannot afford the probes, they probably cannot afford the computers to go with them, either. In contrast, the conductivity tester my students use is simple and cheap. The students can see the battery, wires, and diode — and they have to interpret the brightness in order to compare conductivity of the solution.

One of the questions I hear most frequently is, “Where do I get equipment if I have a limited budget?” Sources for equipment that I have used include pawn shops, garage sales, construction dumpsters — as well as students’ parents who work in the trades. Also, I encourage you to check with any lab in your area that may be open to donating glassware they no longer use or are replacing. We were fortunate to receive donated glassware, including boxes of test tubes, funnels, and vials from a lab in Lincoln, Nebraska that were otherwise going to be thrown away. Even construction dumpsters can provide you with insulation sheets to use in diagramming electron structures. 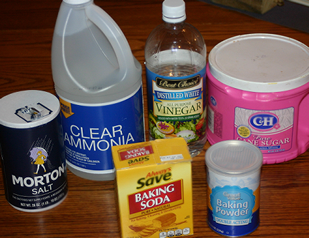 There are many inexpensive labs that are interesting and effective in teaching chemistry — but that can be done using household chemicals or low-cost equipment. If at any time you have a question or want more information, feel free leave a comment below.

My goal in this article was to stir your creative juices, and encourage you to look at everyday things with chemistry in mind. My wife and I often go to garage sales, and while she is looking for bargain items to use around the home, I am looking for something I can use in a future chemistry lab. I hope to find small glass containers with lids that can be used as vials, marbles or golf balls that can be used in a subatomic particle lab, small jewelry objects that can be used in a metric conversion lab or rock collections that contain minerals.

There are plenty of resources out there to make your labs more engaging and memorable — you just need a little imagination and resourcefulness!

Download labs mentioned in this article from the AACT resource library:

Ted Koehn is a veteran teacher with 50 years of experience teaching both high school and college chemistry, including 20 years of teaching applied, general, differentiated and advanced chemistry at Lincoln East High School in Lincoln, NE. Currently he teaches chemistry at Metropolitan Community College in Omaha, NE.