Radioactive Dating: The Demise of Frosty Mark as Favorite (32 Favorites)

In this activity students will investigate the idea that carbon dating is based on gathering evidence in the present and extrapolating it to the past. Students will use a simple graph to extrapolate data to its starting point and then pool the data to make a graph that simulates half-life. Students will be introduced to solving mathematical problems that involve half-life.

This activity will help prepare your students to meet the performance expectations in the following standards:

By the end of this activity, students should be able to

This activity supports students’ understanding of 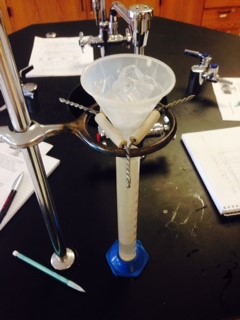 Beloved holiday icon, television personality, and song inspiration, Frosty the Snowman lies melting in the funnels at your lab station. He was brought into class from outside, subjected to a particular frequency of electromagnetic radiation in the classroom (i.e., the lights) and now lies in a puddle at your lab station. Don’t cry though...he will be back again someday. There were no eyewitnesses, but there are several suspects. All the suspects have holes in their alibis. You need to determine the exact time at which Frosty was put into the funnels to melt away, leaving no trace.

Frosty should be melting at a particular rate, one which can be labeled a rate of decay. Decay rates can be used to explain the disappearance of froth on root beer; enzyme-catalyzed reactions in the body; how pressure decreases with increasing height above sea level (changing 12% per 1000 m); and the conversion of radioactive nuclei to non-radioactive ones.

This activity will allow you to develop graphs to illustrate this type of decay; apply it to the concept of nuclear decay; and use the information to capture the criminal red handed!

Use the following table to collect your data:

Looking at the graph that you constructed from the class data on the melting of Frosty, what generalizations can you make about the decay of a radioactive isotope in a sample over time?