In this series of demonstrations, students will be introduced to factors that affect the rates of chemical reactions. They will observe and record their observations, while also describing the rate-influencing factor for each demonstration as well as evidence supporting whether or not the reaction rate was increased or decreased by the factor.

By the end of this demonstration, students should be able to

This demonstration supports students’ understanding of 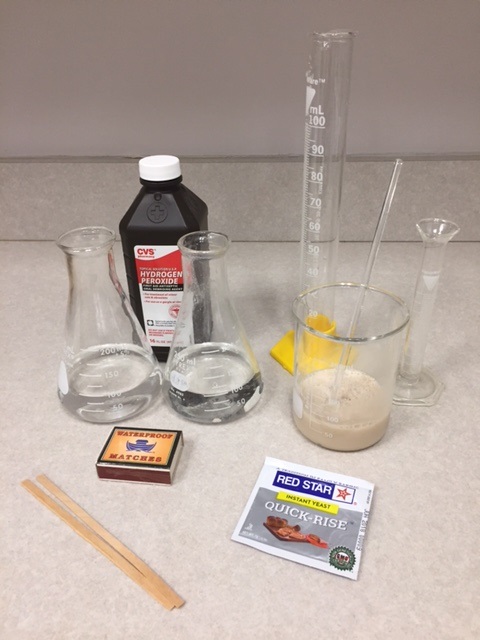 When you hear the word rate, it usually refers to something happening in a specific amount of time, like how fast something grows (growth rate), or moves (rate of speed), heart rate (beats/min) or possibly an interest rate. In chemistry, the rate of a reaction describes how fast a reaction proceeds over time. In other words, a rate of reaction measures how quickly reactants are changed into products. If the volume remains constant, reaction rate can be defined in terms of changes in concentration, the change in concentration of reactants over time or the change in concentration of products over time.

The area of chemistry that involves the study of reaction rates and reaction mechanisms is called kinetics. It involves the study how molecules react, bond breaking and new bond formation. The reaction rate can be written for the disappearance of a reactant (such as a metal sample reacting with acid) or the appearance of a product (such as production of a gas). Reaction rate can also be described on a molecular level. For a reaction to occur, particles or molecules must contact each other with enough energy to break the chemical bonds and cause a chemical reaction. Molecules must also collide with a proper orientation in order to cause a chemical reaction. Any factor that affects the likelihood of an effective collision also affects the rate of reaction. There are several factors that affect the likelihood of an effective collision of molecules and therefore also affect the rate of reaction. These include:

The Type of Reactants involved:

Higher concentration can increase the reaction rate of a chemical reaction. More molecules equal more collisions and more collisions are necessary for reactions to occur. Imagine you're on a freeway in the middle of the night. Traffic is light, with few other cars on the road and you have little trouble getting from one point to another. However, that might not be the case at rush hour when the roadway is filled with cars. As more cars are added, the likelihood of a collision increases. If construction causes freeway lanes to be closed off, squeezing traffic into a smaller number of traffic lanes, it also increases the likelihood of a collision. The same is true of reactants. If more reactants are crammed into a space or if volume is decreased, concentration is increased and reactants collide more with each other, increasing the chance that there will be an effective collision. Any factor that affects the likelihood of an effective collision also affects the rate of reaction.

The rate of reaction can be increased by increasing the surface area of one of the reactants because it affects the ability to mix the reactants. A powdered solid will usually produce a faster reaction than if the same mass is present as a single lump. The powdered solid has a greater surface area than the single lump. For example by cutting or grinding it into smaller pieces, the surface area of a reactant is increased. This means that more particles are exposed to the other reactant, causing more collisions and increasing the rate of reaction. This is why it is easier to start a campfire using small pieces of kindling than it is with larger logs.

The Temperature of the Reactants:

Changing the temperature of reactants impacts the reaction rate because higher temperature increases the kinetic energy of molecules and sufficient energy is needed in order to react (Activation Energy). Temperature is a measurement of the average kinetic energy or energy in motion within a system. As temperature increases, the kinetic energy of the system also increases. Molecules with more energy are likely to have more effective collisions with each other, resulting in an increased rate of reaction. An example of this might be grilling a burger. We add heat to increase the rate of reaction. Decreasing temperature decreases the energy of the molecules, causing the molecules to collide less, resulting in fewer reactions. Cooling food, such as burgers, helps to preserve it by slowing down reaction rates, which helps to keep microbes like bacteria from breaking down the food as fast, and helps to keep fresh fruits and vegetables from decomposing as fast.

The Addition of a Catalyst:

A catalyst is a substance that increases the rate of a chemical reaction without being consumed or permanently changed. This does not mean that it is not involved in the reaction. Catalysts usually lower the activation energy of reactions causing the rate of the reaction to increase. The yeast in demonstration A is used only as a catalyst. An application involving hydrogen peroxide and a naturally occurring catalyst, called an enzyme, is the use of hydrogen peroxide on cuts or wounds. Catalase, the enzyme that catalyzes the decomposition of hydrogen peroxide, is in your blood. You may have seen the bubbling on a cut when the hydrogen peroxide is added. It does not bubble because the wound has germs but rather because the catalase in blood has catalyzed and speeded up the decomposition of the hydrogen peroxide into water and oxygen. The bubbling action helps to lift dirt and germs out of the wound.

Create a data table like the sample below. Identify the rate-influencing factor for each demo and include a description of observations made that support whether the reaction rate was increased by the factor.

Summarize what you learned through these demonstrations. Describe the meaning of the term, “rate of reaction,” identify four factors that can affect it, and how these factors could be used to speed up the rate of reaction.