This lab offers insight into a practical aspect of solubility and demystifies a common ingredient, wheat flour. In this lab students will read about the composition and observe some properties of whole wheat flour by preparing seitan, a vegetarian meat substitute made from the glutenin and gliadin proteins in flour. Gluten, formed from the interaction of the aforementioned proteins, has a unique property of elasticity.

This lab will help prepare your students to meet the performance expectations in the following standards:

By the end of this lab, students should be able to

This lab supports students’ understanding of

Teacher Preparation: 30 minutes to run through lab;
10 minutes to set out materials, plus a trip to the supermarket 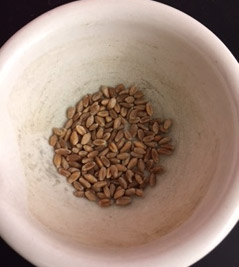 Without using outside resources, discuss the following questions with your lab group.

Wheat flour is made from the edible seeds of the wheat plant, called wheat berries. Flour is made by grinding wheat berries into a powder. Flour is a mixture containing mostly starch (i.e. polysaccharides) and the proteins, glutenin and gliadin. The interaction of water with glutenin and gliadin allows for formation of the protein mixture gluten. Gluten has unique elastic properties giving bread its distinctive texture and is the reason that gluten-free imitations of bread products are often subpar.

In this activity, gluten in flour will first be “developed,” then isolated. Gluten is the main ingredient in the vegetarian meat-replacement known as seitan. The texture of seitan is chewy or meat-like and the flavor is easily manipulated by adding herbs, spices, and sauces.

To develop the gluten, water must be added to flour to allow free movement of the glutenin and gliadin proteins, followed by the process of kneading. Kneading causes glutenin and gliadin to interact and realign to form disulfide covalent bonds, intermolecular forces of attraction, and ionic bonds. These interactions serve to crosslink glutenin and gliadin. The chemical formulas and structures of these proteins are varied and complex, so will not be shown, but you teacher may show you a simplified drawing. To picture developed gluten, think of what happens to cooked, cold spaghetti noodles—they stick together and form a tangled mass. Once the gluten is developed in the dough, it can be isolated by rinsing the dough in water. Due to the low content of hydrophilic amino acids (i.e. lysine, arginine, glutamic acid, and aspartic acid), gluten is largely insoluble in water and so will remain in the dough; however, the starches are water-soluble and will dissolve into the water. The remaining gluten can then be simmered to make edible seitan.

To determine what properties allow for seitan to be made from wheat flour.

In your own words, using three or four sentences, summarize how seitan is prepared. In your summary, be sure to use and underline the following terms: seitan, soluble, flour, starch, gluten, elasticity.