In this lesson, students will use models to explore structural isomers, and create explanations for the impact of structure on intermolecular forces (London dispersion) and physical properties (boiling point).

This lesson will help prepare your students to meet the performance expectations in the following standards:

Engage: Ask students about a recent trip to the gas station and the different grades of gasoline to introduce the concept of octane number, isooctane, and octane isomers. The teacher may want to to have a picture of a gas pump showing octane numbers.

Use the podcasts below as an introduction (some students may be distracted by the British pronunciations of methyl, garage, petrol in the second podcast):

Leading Question: Why might octane and isooctane—compounds with the same chemical formula (C8H18)—have different combustion properties in an engine?

Part 1: This activity can be adapted to the skill and experience of the students in your class. For example use the following suggested variations in student handouts provided:

Students may find it useful to share ideas for systematically drawing structural isomers. In addition, it may be beneficial to provide a short period of time for all students to pool their structures. For example, students could be called upon to contribute structures to the board.

The Compound Interest resource A Brief Guide to Types of Organic Chemistry Formulae is a useful introduction to different representations for organic molecules.

Answers for each of the isomer variations in Part 1 are as follows:

Part 2: The skeletal formulas below are a simplistic way to show preferred orientations for each set of octane isomers. A space-filling 3-D image is provided for reference (3-D images can be modeled and rotated on www.chemspider.org). Student answers for the modeling exercise should be similar to the following, though the level of detail and 3-dimensionality may vary. If appropriate, students may prefer to take photos of the models.

Answers for Part 2 are as follows: 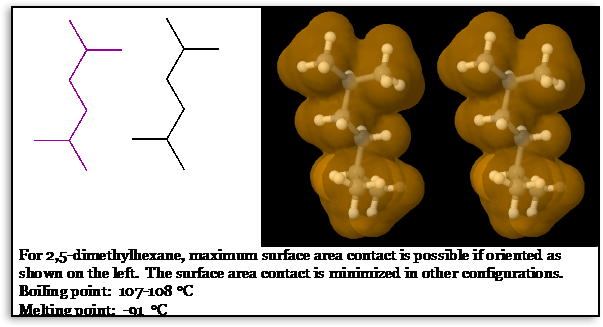 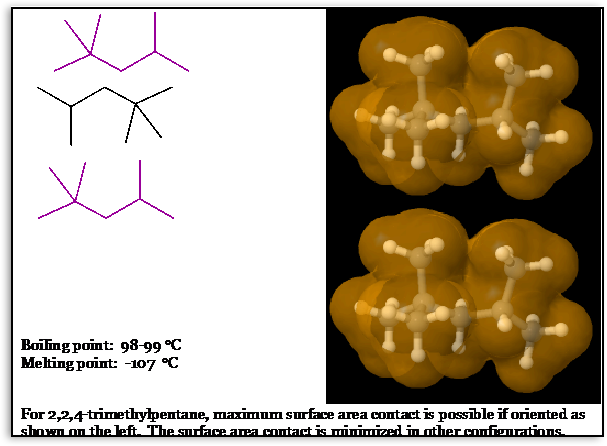 Though London dispersion forces are typically characterized as weak in most textbooks, they are not inconsequential as we can see in the ~25 °C spread in boiling points for the isomers. More surface area = increased IMF = higher boiling points.

Explain: There is a characteristic odor associated with gasoline that can be connected to the physical properties of the hydrocarbon molecules. Many of the hydrocarbons in gasoline are small and have relatively weak London dispersion forces (thus low-boiling) and present in vapor phase near gasoline pumps; we can inhale and smell them.

From the activity, students should observe that the linearity of n-octane maximizes contact of adjacent molecule’s surface area. In contrast, the branching in 2,4-dimethylhexane and 2,2,4-trimethylpentane reduces surface area and potential interaction.

Elaborate: Analysis questions are provided in Part 2 for students to connect structure to physical properties (both intermolecular forces and boiling point). Students will consider how physical properties such a boiling point can be used to separate chemical compounds, and learn about the technique of fractional distillation in the laboratory and industry through this video.

Evaluate: Students will draw structural isomers and answer analysis questions to demonstrate understanding of the key concepts. Students will create a brief procedure for fractional distillation to demonstrate the use of physical properties as a means to separate chemical compounds.

Download all documents for this lab, including the Teacher Guide, from the "Downloads box" at the top of the page.

This lesson plan is part of the "Chemistry of Cars" series sponsored by the Ford Motor Company.