When teaching periodic trends, I have found that my students often have a lot of trouble processing graphical information represented in tables or plots. The zigzagging graphs of atomic number vs. atomic radius often confuse them, or obscure the trends that they are supposed to reveal. Going over examples to illustrate the trends leaves many students wondering what the point of the exercise really was.

In my earlier years of teaching, I addressed this topic by showing the students some patterns on the periodic table and coaching them on how to (somewhat tediously) place in order a bunch of elements based on properties like reactivity, ionization energy, atomic radius, etc. We would go over some worksheets filled with lists of elements that the students had to list in order according to increasing or decreasing trends. I would show Bohr models of atoms to explain why the atomic radius increases going down a group, and decreases across a period, and so on.

But how to help students consolidate these ideas and apply their knowledge during a review without doing more worksheets and writing more explanations? That is how I came up with the idea of making a game that would review the trends in a fun, but effective way. What is a favorite and easy card game, familiar to many students? War. That’s why I call my version of the game, based on the periodic trends, Periodic War.

Reviewing the basics of the game

If you are not familiar with the classic game of War, the basic idea is that players are dealt out all the cards from a deck evenly. Play involves each player flipping a card face up from the top of their hand. The player who has the highest value card wins all the cards shown. Play continues until one player has won all the cards. During the run of play, if players flip over the same value cards — for example, an eight of clubs and an eight of spades — then a war takes place! During a war, each player places three more cards from their hand face down, followed by a fourth card face up. Whoever has the highest-value fourth card wins all the cards played during the war.

War is often one of the first card games that people learn, and despite its simplicity, people get very competitive and enjoy it, no matter what age they are. With this in mind, I wanted to capture the competitive fun of War in a similar game that would also help to teach students about periodic trends.

Implementing the game in the classroom

I put my idea into action. I cut 20 colored index cards in half, handed them out, and told each student to write the element symbol, atomic number, and atomic mass on one side of the card, leaving the other side blank. (It may be helpful to have the students add the name of the element on the card as well. This may help them learn the names along with the symbols for the elements.)

Students made cards for the first 40 elements, from hydrogen to zirconium. Additionally, some students added little drawings to enhance their simple cards. While there are options to purchase these types of cards online, or print from a template, I have found that allowing students to spend a few minutes making them helps them familiarize themselves with symbols, names, and related information about each element.

Usually I would begin the unit about periodic trends by introducing patterns on the periodic table, reviewing basic information about the table, and performing a demonstration of reactivity patterns with lithium, sodium, and potassium metals.

In the following class, we would discuss our ideas about what caused the pattern in reactivity in the alkali metal demonstration. This is a good segue into analyzing the Bohr models of different atoms and learning about atomic radius, ionization energy, and electronegativity. After some specific examples about these periodic trends, it was time to introduce Periodic War and try playing.

Students were placed in pairs or groups of three, and each held their own set of element cards, shuffled in a random order. The students all waited for my command — 1, 2, 3, go! Then everyone flipped over the top card in their hand. I quickly announced, “Largest atomic radius!” As I observed a group of three play the game, the cards that appeared on the table were carbon, phosphorus, and chlorine. Which had the largest atomic radius? Phosphorus! So, the student who had flipped the phosphorous card claimed all the cards on the table and added them to the cards that they held. I also instructed the winning player to explain why their card had the largest atomic radius to the rest of the group before they could take up the cards they had won. I went from group to group, watching each group complete a couple of rounds, and making sure that they were providing explanations to the group before taking the cards.

Typically, we spend about 20-30 minutes playing the game, covering the periodic trends of atomic radius, electronegativity, and ionization energy. No periodic tables or actual values, other than those posted in the classroom, are permitted, so students start learning where the elements are located on the periodic table.

Since this is a qualitative exercise, we occasionally run into the issue of conflicting trends, such as in the case of carbon, silicon, and phosphorus. Here, a brief discussion of group vs. period trends can be informative, while looking at the actual values to convey the idea of gaining a whole new shell of electrons as you move down a group versus gaining electrons in the same period. It is also a good chance to talk about predictions versus actual data: while making predictions is often helpful, actual experimentation may be necessary to reveal new insight or questions about a particular chemical property.

For example, why is it that the first ionization energy of oxygen is greater than that of nitrogen? A short discussion connecting students’ understanding back to electron configuration can help explain how electron-electron repulsion affects ionization energy. In addition, you can ask how the students would experimentally measure the atomic radius, then show the actual way that atomic radius is measured, with examples from real molecules. How deeply you choose to go can be tailored to different class levels. I usually use this game twice during the unit, once near the beginning when students are first learning about the trends, then again before the assessment. In other years, when time is limited, the game is just used as a review activity.

Students found that this version of War was easy to learn, and they caught on quickly. I noticed that students would help each other with explanations about the specific trend during each round, and they would also call out a person if they chose the wrong card as the winner. The games often got a bit loud with the sound of slapping on desks and arguments over which card won. I noticed that the students took a lot of pride in winning, and that they left in a good mood.

After the game, in the last minutes of class while the students were cleaning up, I would put up a couple examples on the whiteboard to review, which they immediately tried to answer. I was always gratified by the fact that the standard type of problems had taken on new excitement after the game. Some students even asked if they could play again! Before an assessment, I remind students that many of the questions about trends are just like the card game.

There are likely other chemistry topics that a game of War could be designed for, too. I have used other games — like bingo to learn elements and treasure hunting to review bonding. But I always find that the simpler the game, the better. My students like simple games; it seems that the stress of learning a new concept is lessened when they already know how to play the game. Wouldn’t it be nice if all learning felt like you were playing a game?

I find that teaching periodic trends takes less effort now, and I look forward to playing Periodic War each year with my students. If you think of other easy and quick chemistry games using the concept of War, please share them with me and the community on the AACT Discussion Board! 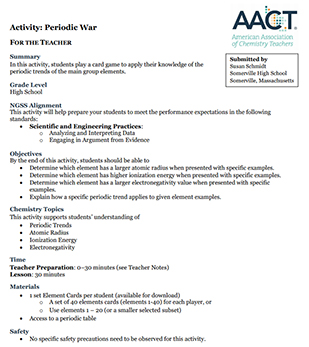 Susan Schmidt has taught chemistry at Somerville High School in Somerville, Massachusetts for 10 years and is currently pursuing a master’s degree in chemistry at Tufts University.