The use of scientific modeling is an integral part of learning chemistry and is one of the fundamental practices of authentic science. With the recent adoption of the Next Generation Science Standards (NGSS) in many states, the emphasis on the use of modeling in the classroom has increased, as it is one of the major science practices within the framework.

Therefore, it is critical for students to have the opportunity to engage in scientific modeling for developing and evaluating explanations of the natural world.1 Students need to be able to construct and understand the purpose of using models in chemistry as well as its limitations. Unfortunately, most modeling activities in K-12 chemical education are limited, being used only to illustrate or communicate understanding with little emphasis placed on the predictive function of models.2

In this article, I am going to describe how to use learning progressions to transform your existing modeling activities to help students construct and use models as a learning tool for predicting and explaining phenomena. The goal is to have students learn to use models spontaneously to support their thinking and eventually generate new questions about phenomena.

A scientific model is a simplified way of describing, explaining and predicting a scientific phenomenon that may be difficult to understand or directly observe. Models are a vital practice for both scientists and learners, and are routinely used in science not only as learning tools, but also as representations of abstract concepts and as consensus models of scientific theories.3

Students’ experiences with scientific models help them to develop their own mental models of scientific concepts. In addition to learning how to construct models, students need to understand the nature and purpose of modeling as well as its limitations, so that they can use their models as a tool for learning rather than simply to communicate understanding. But as De Jong4 explains, the practice of scientific modeling can be difficult for students and teachers to develop, as even experienced teachers’ knowledge of models and modeling is rather limited and diverse. Through the use of learning progressions, teachers and students will be able to have a better understanding of how to effectively construct and use models in chemistry.

What is a learning progression?

A learning progression describes a pathway a learner may take as they successfully move toward more sophisticated ways of thinking about an idea over time.5 Learning progressions attempt to understand the nature of the skills that students need and how they develop over time as they move from a limited to more complex understanding. Most importantly, learning progressions inform the teacher as to how to support student learning through instructional practices, materials, and assessments throughout this journey.6 The two learning progressions for scientific modeling that I used to improve my existing modeling activities were developed by Schwartz, et al1 and are shown in Tables 1 and 2. These learning progressions seek to integrate the elements of the practice of modeling with the underlying knowledge that makes it meaningful.

As a teacher, these learning progressions can be used as a guide or pathway to develop lessons that engage one’s students in successively more sophisticated levels of engagement in and knowledge of scientific modeling practices.1 As you can see from the progressions above, the highest level of engagement has students spontaneously using models to better understand a system or phenomena for both their explanatory and predictive power. Students are actively constructing and using models to improve their own sensemaking and create new knowledge. This is a level of modeling that is very different than most of the modeling activities that I was engaging my students in. In the next section, I will explain how I used these learning progressions to improve my existing modeling activities and make them more meaningful to my students, so they could use them as a learning tool rather than just a means to demonstrate their knowledge.

How to use the learning progressions to improve modeling

For example, one of the modeling activities that I was using prior to modifying it with the learning progression scales focused on the process of dissolution. In this activity, students are tasked with constructing a model of a salt crystal using cutouts (Figure 1) based upon a teacher-provided image (Figure 2). Students then use this model to demonstrate their understanding of how salt crystals dissolve in water by manipulating the cutout model using the provided image (Figure 3) as a guide.

Using the learning progression in Table 1 (models as generative tools for predicting and explaining), I placed my existing modeling activity at a level 2 performance, because students were constructing their models to illustrate and explain how a phenomenon (salt dissolving in water) occurs, which is consistent with the evidence that they observed about this phenomenon. Furthermore, students utilized authoritative evidence (Figures 2 and 3) of this phenomenon provided by the teacher in developing their model — but unlike a level 3 on the learning progression scale, they were not using it to support their own thinking. This was an aspect that was lacking in all of my modeling activities, as the student focus was always on illustrating a phenomenon to communicate understanding.

Using the learning progression in Table 2, I placed my existing modeling activity at a level 1 performance, because students were not comparing models for evaluation purposes, but rather determining if the model they constructed was correct in reference to the phenomenon (dissolving of salt) that I provided. There was no emphasis placed on comparing, evaluating, or refining their models.

Modifying the activity to move up the learning progression scales

Using the learning progressions as a guide, I made simple changes to the modeling activity, focusing on having students develop their own models of what they thought was occurring. I also added some additional components such as critiquing and refinement, to advance it up the learning progression scales. In the revised version of this activity students were tasked to build a model of sodium chloride based on their own knowledge of ionic compounds. Then they were asked to construct a model of the interactions between water and their salt model to develop an understanding of what caused the salt to dissolve. This allowed for students to develop a deeper understanding of the dissolution process as they tried to make sense of this phenomenon, and also to highlight any misconceptions they had. After refining their models based upon class discussions and critiques, students then constructed a model of the interaction between salt and a different solvent, alcohol. Finally, using their models, they made predictions as to which solvent (water or alcohol) would be better at dissolving the salt.

I would categorize this revised lesson as a level 3/4 on the learning progression in Table 1. Students are now tasked to construct multiple models (salt, water and salt interaction, alcohol, and salt interaction) to explain the dissolving phenomenon, as well as make predictions about how other substances may behave. In addition, students are now using the models to support their own thinking to develop both testable claims as well as critique alternative models for advantages and weaknesses to aid in refining their own models and understanding. What advances this lesson towards a level 4 is that students are asked to use their models to generate new questions about why some substances don’t dissolve in water, even when they are ionic. What keeps it from being a level 4 on the learning progression is that students are not using models spontaneously to help their thinking.

It is my opinion that this level can only be reached after students have familiarized themselves with modeling activities and have utilized them on a frequent basis. As they begin to develop a deeper understanding of how to use models and why they are important, they will begin to use them more frequently, spontaneously solve problems, and better understand new phenomena. This is what I observed taking place in my classroom throughout the year once I started using the learning progressions; when students were confronted with a problem, they would build a model to try and understand it better.

For the second learning progression (Table 2), I would categorize the revised activity as a level 4. Students are now required to evaluate competing models (during their class discussion and evaluation) and determine which aspects of other models are good and whether they could be incorporated into their models to enhance their explanatory and predictive power. Students are also asked to make changes to their models prior to testing against evidence for the dissolving phenomena.

As a result of these improvements to my existing modeling activities, such as the example discussed in this article, I have observed students becoming more comfortable with the process of constructing and utilizing models in the classroom. I began by making simple changes to my current activities to help students develop modeling skills and understanding, and then gradually added additional tasks to progress them up the learning progression scales.

The most efficient way that I found to improve existing modeling activities is to have students construct their models without any resources, so they could develop their own understanding and make sense of a phenomenon. This allows for students to identify which aspects of the phenomenon they don’t understand, and also provides an opportunity for the teacher to assess them so they can facilitate their learning. The second modification is to provide the opportunity for discussion, evaluation, and critique of their models so they can refine them.

Lastly, I have the students apply their models to new phenomena to make predictions and further refine their models. It is important to note that not every activity will be at a level 4 on either learning progression scale, especially at the beginning of the year. The goal is to move students up the scales throughout the year, so that they develop the appropriate skills and understanding of how to effectively use modeling and make it become more meaningful to their learning. As many states begin the adoption of NGSS (which assesses the practice of modeling), I would recommend giving students access to these learning progressions so they can monitor and self-assess their modeling abilities and progression throughout the school year. 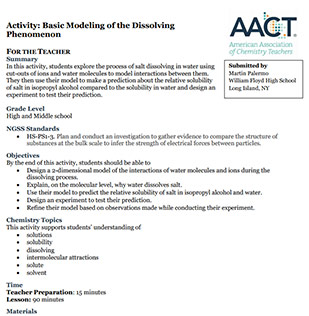 Download the activities mentioned in this article from the AACT resource library:

Martin Palermo is a Regents Chemistry teacher of 11 years working in the William Floyd School District on Long Island, New York. He is a New York State Master Teacher who conducts educational research with the Rushton Research Group at Stony Brook University, where he is pursuing a Ph.D. in chemical education.