My Late Love of Chemistry In elementary school, teaching was never a career path I expected to take. My father was a police officer, and as much as I respected him and his coworkers, I wanted nothing to do with it or other emergency response professions. As a member of science-based academic clubs, such as Young Astronauts in fourth grade and Science Olympiad in seventh grade, I remember being asked whether I would consider becoming a teacher, and my response was always an emphatic “No.”

That all changed my freshman year of high school because of my world history teacher, Mr. Havas. He was not the most exciting teacher. In fact, many of my peers hated his class and, by association, him. In retrospect, he pushed the envelope by teaching abstract material to freshmen, but I was hooked on not just the rich details of history but also the philosophical ideas he taught us. I joke now that I made the mistake of mentioning later that year to my guidance counselor that I would consider teaching in the future. I was noncommittal, but he latched onto that idea and didn’t relent until my junior year, when I gave in and seriously considered teaching.

During my junior year, I was allowed to take science electives. We had only three first-year science electives, and I took both chemistry and physics, with Mr. Williams and Mr. Shade, respectively. Although I did well in both, physics was what I loved, and I decided that I wanted to teach that subject. Chemistry was sometimes interesting, and to this day, I remember some of the labs and demonstrations. But my overall impression was that it was a lot of white powders and clear solutions that reacted to form other white powders and clear solutions. Furthermore, Mr. Williams didn’t have the same enthusiasm as Mr. Shade.

I started limiting my college choices to ones that would allow me to major in physics education, and that led me to Cedarville University. There, my adviser suggested I get my bachelor’s degree in physics. Rather than sticking with Cedarville’s five-year physical science education B.A. program, he encouraged me to get my teaching license in my fifth year start my master’s at another university. This route changed the required chemistry classes I needed, so I had to restart the general chemistry series. Still not loving chemistry, I skipped class frequently, but passed with A’s. Ten days after I finished my B.A., I started my graduate program at the University of Dayton, where I took the necessary courses to earn a teaching license in physics. While I was there, I student-taught freshman physical science with Mr. Robert Group at Beavercreek High School.

I was disappointed with the assignment because I wanted to teach physics; I even tried to get reassigned, but to no avail. So I taught with Mr. Group for six months and spent half of that time teaching chemistry topics that I was only vaguely familiar with. Mr. Group helped me understand concepts that I had memorized previously. I learned more about chemistry in just a few months while teaching with him than I had in three years of high school and college classes.

After I finished student teaching, I had to find a job. I interviewed everywhere, but had trouble finding a position. For the summer, I painted apartments for my uncle, who was a landlord and a professional chemist at Procter & Gamble. I learned that summer of a rural school close to my hometown that was looking for a physics and chemistry teacher. I knew chemistry was my weakest area, but I was desperate for a job. I applied and interviewed twice. During those interviews, I discovered that being a teacher in a rural school would be demanding. Not only was the job to teach high school physics and chemistry, but it also required teaching two classes of freshman physical science and two eighth-grade general science classes.

I lied through my teeth about my ability to teach chemistry and was more confident in my interview than I actually felt. But in reality, I knew I could learn the necessary chemistry from the textbook a few weeks ahead of my students.

I was hired by Russia (pronounced “Roo-shee”) Local School in fall 2005. I found out the day before school started that I would also be teaching a fifth prep, senior science, which was an independent study for one student who exhausted all of the science electives. I was also the only coach of both the junior high and high school Science Olympiad teams.

I poured everything I had into my new job, but especially into chemistry, which was still my weak suit. That alone caused chemistry to become my best and toughest class. I fell in love with the subject, and not just because I was now the trained professional who got to do demonstrations and make things go bang. I, for the first time in my life, understood chemistry. And there was so much to learn that I didn’t know yet. 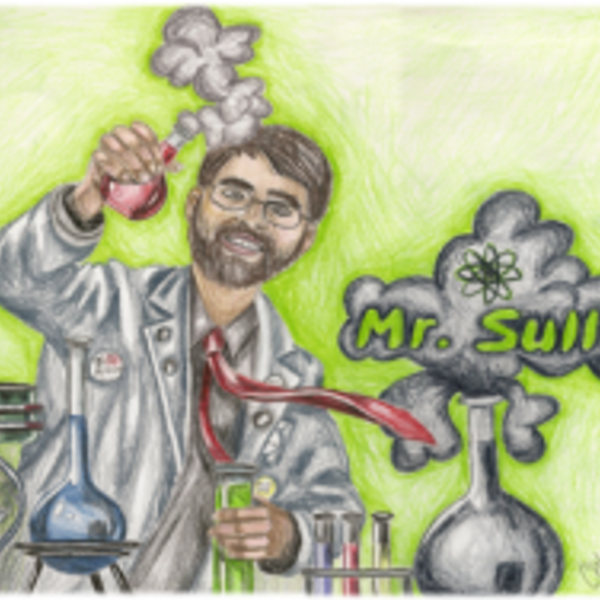 The next school year, despite having plenty of room to grow, I found myself getting bored teaching the same things again and feared 34 more years of this monotony. I had to try new things to avoid that problem. Furthermore, I found myself with an insatiable thirst for knowledge, especially chemistry. That year, I was awarded a grant that enabled me to take full-time classes to add chemistry to my teaching license. It was a busy year, but the experience was well worth it. Physics may have been my first love, but chemistry is where my heart is now.

In my time at Russia, I have taken on two additional classes: Earth and space science and AP Chemistry. I have always had five or six preps, although the first year I taught AP Chemistry it was an extension of the general chemistry curriculum. The next year, Earth and space science was dropped so the two chemistry classes could be separate. I have started or taken over additional clubs (as if I need more to do), including ChemClub, Chess Club, and Envirothon. I still devote a lot of my time to learning new material, and most of that is in chemistry. However, I cannot imagine teaching the same class more than twice in one day—to me it just sounds boring and tedious. I love what I do, and I am truly in my element.

Do you have a uniqe story about how you came to be a teacher of chemistry?

In My Element articles feature teachers' interesting stories. Did you follow a nontraditional path to become a teacher of chemistry? Tell the community about it by writing for In My Element.