“Chemistry is Fun” is the slogan on a pin that I wore on my lab coat for the 30 years I taught chemistry. Unfortunately, chemistry is sometimes more daunting than fun for students when they begin to learn the subject. I truly believe that chemistry is difficult for many students because we can’t “see” what is happening to the tiny atoms and molecules, we can only observe the results on the macroscopic scale. I think it is important to help students describe macroscopic phenomena at the molecular level and teach them to draw diagrams, or models, of the molecular view. These particle diagrams help students understand various chemical concepts and give the teacher a formative assessment of what students may or may not understand.

I developed the Magic Bubble activity to introduce students to particle diagrams. The activity helps students understand what happens when two miscible liquids mix. The activity involves a discrepant event when two liquids are mixed: isopropyl alcohol and water. Students begin to comprehend the small size of atoms and molecules when they discover and explain the process of mixing.

The initial preparation for this activity may take an hour or more, but once it is prepared, it can easily be stored and prepped for students in 15 minutes. Both teachers and students have fun with this activity!

View the full lesson in the Classroom Resources library. 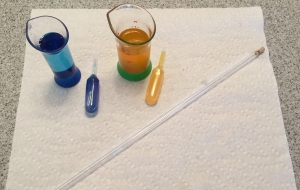 Although this activity touches on the concept of dissolving, its greatest value is getting students to realize that matter is composed of particles and that there is empty space between particles. After students complete their final explanations and particle diagrams, you can culminate the activity by discussing what happened on the molecular level and why a bubble forms, regardless of whether two liquids or two solids were used.

Because this is an introductory particle modeling activity, I do not expect students to draw individual atoms that make up the substances (note that above, water particles and food coloring particles are represented as single circles). As students learn more about elements, atoms, molecules, compounds, and mixtures, they refine and draw more detailed particle diagrams.

*Note: The small glass tubing included in the teacher instructions can be purchased at any supply company. Flinn Scientific has a product (GP9030) that can be cut in half for this lab.

In this article, the author provides insight about the lab she wrote, "Magic Bubble." Download the lesson.