To keep up with the need for workers with mastery of advanced problem solving skills, education must evolve to encompass several practical objectives at once. Ideally, just one or two activities would work in a scaffolded sequence to move students ahead in all areas simultaneously. However, especially in a chemistry classroom, few activities meet this standard.

A new variation on a classic acid-base experiment may offer insights into finding a better approach. As described below, this variation allows students to study several concepts at once, including acid-base reactions, limiting reactants, gas laws, and stoichiometry. It does so by allowing students to observe the contained reaction of acetic acid (2.5% vinegar solution) with sodium hydrogen carbonate (baking soda) in an unconventional, cost-effective titration.

This revised method of titrating is more efficient and more engaging than dropping chemicals from a buret. Rather than finding the equivalence point by using an indicator or by measuring pH, students determine equivalence by examining the partial pressure of the gaseous product. Therefore, the activity can be used as a stoichiometry lab to enhance an acid-base unit, or as an unconventional, engaging exploration of limiting reactants and/or gas laws.

A new path for investigation

In this activity, students react a fixed amount of baking soda solution with increasing quantities of 2.5% vinegar solutions. The monitored product is carbon dioxide gas. Initially, the amount of carbon dioxide produced is limited by the quantity of vinegar. As the amount of acid increases, the stoichiometric equivalence point is reached. After that, the baking soda becomes the limiting reactant, causing the partial pressure of carbon dioxide to remain constant from trial to trial. Students then calculate the point where the product pressure “flatlines” against the vinegar volume. This is the stoichiometric equivalence point.

This activity is an improved substitute for a well-known limiting reactant lab. The more traditional approach uses a series of balloons filled with increasing amounts of baking soda (Figure 1). The balloons are attached to test tubes, each filled with a constant volume of diluted vinegar. Students pull the balloon upright and dump the contents of the balloon into the diluted vinegar. After the reaction ceases, students can measure the circumference of the balloon with a piece of string, and record the change in circumference caused by carbon dioxide gas produced in the reaction. Relative volume of the gas produced can be calculated from the cube of the measured circumference.

The reaction is dramatic and colorful. However, there are several sources of inaccuracies that accompany this procedure. For example, some baking soda often adheres to the internal surface of the balloon and fails to react. Moreover, even balloons from the same package can differ widely in construction and quality, making it difficult to accurately measure the circumference of the different balloons. It also takes an extensive amount of time for students to redo a failed trial, since the gaseous product can blow liquid into the balloon and make its replacement necessary before the repeat attempt.

The suggested improved procedure is simple: Students measure a known 0.03 molarity baking soda solution into an Erlenmeyer flask and then add small, increasing volumes of diluted vinegar solution. They stopper the flask and measure the increasing pressure of the gaseous product. The innovative lab allows students to investigate acid-base reactions, stoichiometry, gas laws, titrations, and limiting reactants — all concepts covered in a traditional first-year chemistry course. Ideally, this activity would be performed toward the end of the year, after initial study of these topics, ensuring that students are adequately prepared to synthesize these diverse skill sets and understand the underlying concepts. They are then able to draw appropriate, logical conclusions from the activity.

This activity requires either a computer and interface, or a hand-held recording device with a digital pressure sensor (Figure 2). In my classes, we use Logger Pro software on a computer connected to a Vernier Gas Pressure Sensor. When collecting data, students calculate the millimoles of acetic acid added each time into the Erlenmeyer flask and graph this variable against the change in pressure. The data collected on the computer interface and the calculations can all be uploaded to a Google Docs file (Table 1) and then shared with the entire class.

This approach multiplies the number of trials and improves accuracy and precision, without requiring students to conduct more than one series of reactions. The necessary reactants, baking soda and vinegar, constitute a cheap and easily accessible, time-honored acid-base pair for the reaction. Since trace amounts of contaminants in tap water are negligible in this reaction, distilled water is not required to prepare the solutions (Figures 3 and 4).

The largest source of error in this investigation is excessive shaking of the reaction flask. By doing this, students may hope to increase the pressure of carbon dioxide. Some students believe that the graphs of time vs. product pressure should have a positive slope “forever” (for all amounts added). Teachers need to emphasize to students that they cannot let past results influence how the following trials are conducted. They should remind students of the “control principle”: it is necessary to agitate all solutions equally for a consistent amount of time. Best results come from swirling the flask gently, as the pressure of carbon dioxide will eventually level off after the limiting reactant has been consumed completely. 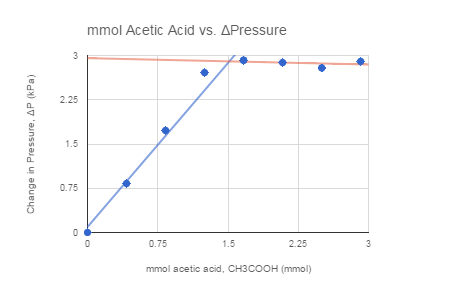 Graph 1: mmol Acetic Acid vs Δ Pressure. Note: the equivalence point can be seen at 1.5 millimoles of acetic acid (2.5% vinegar solution) added, which corresponds to a 1:1 ratio with the 0.03M baking soda solution. Values are calculated based on an average of two trials conducted by two lab groups.

According to the test experiments and student commentary, the Best Molar Ratio lab adds to students’ understanding of integral chemistry topics. This new lab protocol improves upon the balloon lab procedure in furthering an understanding of acid-base mole ratios. The protocol is simple for teachers to set up, because it uses commonly available lab equipment and chemicals. On the basis of our data, the deviations were significantly lower: 3.11% for the suggested protocol compared to 13.35% for the “balloon lab” described, due to the optimized instructions and utilization of advanced equipment.

W. Pat Cunningham is a senior chemistry instructor at C.T. Johnson High School, San Antonio, where he teaches pre-AP chemistry, AP chemistry, and Scientific Research and Design for the Science and Career Tech departments. He has 28 years of science teaching experience.