Q & A with Michael Dayah 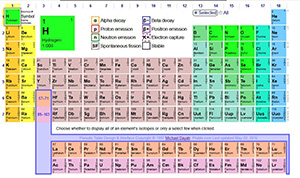 In the chemistry classroom, the periodic table holds a special place of honor. Like a compass for a navigator, it guides teachers and learners through the world of matter. It reveals layer upon layer of patterns and trends and helps students understand properties of matter.

Recently, Chemistry Solutions caught up with Michael Dayah, creator of ptable.com — one of the first online periodic tables. We asked him to share his story about how he created ptable.com as a high school chemistry student, and how he’s updated it since then to support teachers in more recent years.

Visit the AACT resource library to access three new activities that incorporate ptable.com. And please start a discussion to let us know if and how you currently use ptable.com in your classroom!

Why did you create ptable.com?


Dayah: Ptable.com started out as a way to practice HTML. It was 1997, I was enrolled in high school chemistry, and there were other periodic tables online. But none actually gave you the names of the elements — only their symbols. I was home from school, at the time, recovering from toe surgery. The first version wasn’t that pretty, unless you had a huge monitor or really liked to scroll. It sat dormant at the same URL for eight years without much improvement. When I checked on it in the early 2000s, I noticed it had climbed high on Google’s ranking. Knowing people were actually finding and using it (and not just admiring the HTML) motivated me to make it more useful. I spent the next few years adding as much interactivity as I could, engineering visualizations, curating data, and translating it to dozens of languages so people all over the world could use it. I wanted it to be the best. Building the original site in 1997 gave me a lot of insight into the element naming controversies that were going on at the time. It was interesting to watch that play out, and update the table years later with agreed upon names, as well as reclassify elements as new standards came out.

What is unique about ptable.com compared to other online periodic table resources?

Dayah: Deep down, what makes ptable.com different from others is the way it’s programmed. There are neat interactive sites out there, but they’re usually written using premade packages of code. This can be limiting. For example, there may be a nice piece of code out there that will color regions in proportion to a specific value, but it can’t be easily modified to do so quickly, in response to a slider, or logarithmically. Ptable.com does not contain any library of prepackaged code. All the code on ptable.com is custom-made, so the interesting visualizations and features are unique to the data it’s presenting, while still being fast.

All the code on ptable.com is custom-made, so the interesting visualizations and features are unique to the data it’s presenting, while still being fast.

How do you hope ptable.com may benefit teachers and students?

Dayah: The more visualizations I built and the more I played with them, the more I realized how interrelated all the raw data really is. A standard, static periodic table can only show so much data at once. This limits the depth of inquiries you can make about that data. If a test asks you whether atomic radius increases or decreases within a period, even with all the info gridded into a periodic table, you’d spend a few minutes making sure the numbers consistently increased or decreased left to right. That’s about as in-depth a question you can ask without taxing someone’s patience.

But suppose you wanted to ask more interesting questions, such as: “Are higher densities correlated with higher melting points for metals and nonmetals? Why might this be?” or “Around what atomic number do elements start having more beta- than alpha-decay isotopes?” or “Most trans-actinides only form compounds with which elements?” Even with all the paper and data, you’d need a minimum of 15 minutes to find your answers. Without the proper tools, answering some kinds of questions may not be reasonably possible, even with all the tables in front of you. I want ptable.com to be the tool that lets you ask more interesting questions, and actually be able to answer them.

With Ptable.com, you can manipulate data and properties to answer questions about the elements. Here are a few examples:

Did the process of researching connections on the periodic table for ptable.com grow out of your overall interest in chemistry, or was it the other way around?

Dayah: I think I always had an interest in both. It was the combination of understanding a reasonable amount of chemistry and also knowing how to build visualizations that came together to make ptable.com successful. Another company I work for, FlightAware, was successful for a similar reason. The people there are passionate about both flying and software, so they were able to build the best flight tracking software out there — something someone who was only a pilot or only a programmer could not do. I think that’s true for teachers too. When you combine a passion of teaching with one for a specific subject area, you get the best teachers.

With ptable.com, you can manipulate data and properties to answer questions about the elements. Here are a few examples:

What are your plans for the future of ptable.com?

Dayah: The next step is to offer apps for all tablets and platforms, so that students can take it anywhere, even without Internet access — a very important feature in the developing world. Ptable.com is already offered in 45 languages, but if it’s accessible only when the user is connected to the Internet (something we take for granted in the U.S.), it’s not nearly as useful. I’m also working with some colleges to implement Smart Board-style touchscreen setups for use in classrooms and even with real life displays of elements.