The Tale of Two Chemistries

As any chemistry teacher knows, the central science is rife with difficult concepts, complicated models, and abstract explanations of substances that have never been seen. This complexity naturally drives teachers to find ways to simplify chemistry ideas for students. We use analogies, images, graphs, cartoons, and a variety of other resources and strategies to bring the ideas of chemistry to students in ways they can more easily grasp and comprehend. Any strategy that allows students to make sense of complicated concepts is a useful strategy. We must, however, take caution with our words to ensure that we don’t simplify concepts so far that what we say becomes wrong.

As a teacher of both first-year and second-year chemistry, I am in a position to directly evaluate the effectiveness of my first-year course by assessing the preparedness of the second-year students. At the beginning of each unit in the second-year course, I become aware of students’ misconceptions, and the holes in their understanding become apparent as they delve deeper into the fundamental topics they learned in the first-year course. This recurring phenomenon serves as a reminder to me that I must pay close attention to my words when I introduce ideas. Like most chemistry teachers I have met, I am skilled at taking complex ideas and expressing them in simple language. However, having taught second-year chemistry for a number of years, I now realize that some of my simplifications have increased students’ misconceptions rather than eliminating or reducing them. Table 1 shows two examples of oversimplifications I have made in my first-year class that led to students’ misconceptions. I’ve also included how I’ve changed my explanations to prevent this.

Examples of misconceptions as a result of simplifications from my experience.

There are many ways that simplification can lead students astray. The first example in Table 1 shows that in an attempt to make a specific skill easier for first-year students (patterns of charges for ions), I unintentionally led them to generalize the assignment of charges to all situations, thus confusing the concept I was attempting to strengthen in the later class. The second example shows how a simplified phrase (special stability) intended to gloss over the bigger ideas turned into a memorized fact, even when further explained and addressed in the second-year class.

Younger children often repeat words out of context that can be interpreted as either alarming or hilarious, because much of a child’s life involves learning by imitation. Though older children develop other methods of learning throughout their schooling, the second example in Table 1 shows that there is still a tendency for high school students to occasionally revert to imitation as a learning technique. I have certainly heard my own students parrot my words while working through a problem or when helping another student. My students’ propensities for imitation show me that I must be careful in choosing my words. Before discussing these difficulties with students in an attempt to understand their barriers to learning, I hadn’t really considered the effects that my simplifications may have on their future mindsets.

For example, a few years ago my AP Chemistry class was learning about polar molecules. They were specifically focused on learning about structural aspects of molecules that might affect the magnitude of a dipole moment. One of the students said, “But last year you said that the lone pairs don’t affect the polarity.” Yes, I said that. Oops … time to backpedal! This was neither the first nor the last time that I was “caught” telling students something in first-year chemistry that I would completely reverse in second-year chemistry. I eventually began to hear myself say things during my first-year courses and then immediately think of the argument that a student would give me the following year when diving further into the same topic.

The second-year students began to jokingly accuse me of “lying” to them during their first year and only revealing the real story during the second year. This is when I realized that “telling the truth” from the beginning might be a good idea. Initially, the arguments against this idea were that the students were too inexperienced to make sense of it or that it wasn’t necessary to dig that deeply during a first-year course. Over time, however, I have come to realize that my students benefit when I expose them to chemically accurate concepts from the beginning, rather than simplifying to the point where I contradict what will be learned in a future chemistry course.

Many television advertisements feature stories of a seemingly insignificant event that triggers a comedic string of calamities. Though perhaps not as comedic as the commercials, the cartoon below (Figure 1) shows an exaggerated set of parallel stories that I have developed with the intention of showing, like the light-hearted commercials, that the effects of our teaching today may have implications far beyond our students’ next courses. 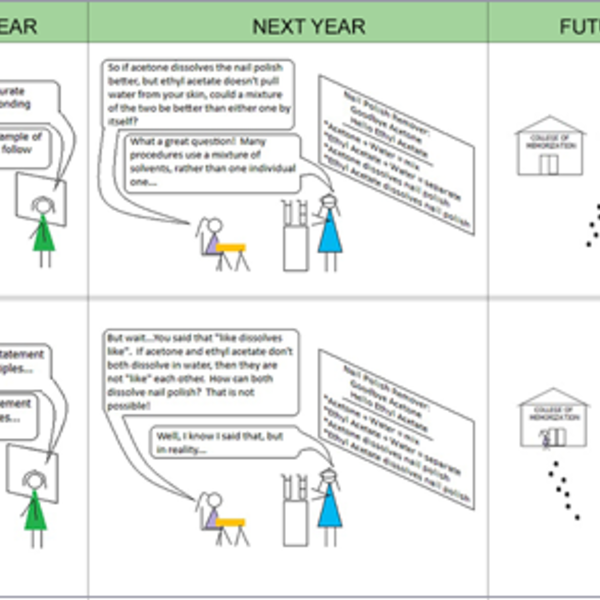 In the top-row chemistry class, the student is given accurate information, simplified enough for them to understand, but not so simplified that it hampers her ability to critically think about the concepts. In the bottom-row chemistry class, the student is given oversimplifications, which leads, in the cartoon, to a lack of ability to think about what she is learning.

Certainly I do not mean to imply that we can promote critical thinking merely by avoiding simplification. I do, however, believe that if we are not careful and thoughtful in our simplifications, they may compromise our students’ abilities to think deeply about the topics related to those simplified ideas. Certainly, memorization of simple facts has its place, but in a course filled with opportunities for critical thinking, we do the students a disservice if we don’t foster this type of thinking every chance we get.

I believe that we can be chemically accurate about very complex topics without having to teach graduate-level chemistry. I see no harm in telling students that you are giving them a simplified model that is not strictly true so they can understand how to start thinking about atoms and molecules. For example, over the past few years of teaching bonding principles, I have found myself repeating that we are only examining the simplest models using examples that are easy to classify and that there is really a lot more variety to the possibilities. Even this simple reminder is useful because it helps students realize that scientists use models and patterns to help make sense of things but that those models and patterns are never a perfect representation of the real thing. Pretending that atoms and molecules can be characterized into only two or three perfectly defined boxes may lead students to close their minds to other possibilities and decrease their ability to critically think about what they are learning.

Though the examples I use in this article are all related to bonding, there are opportunities for critical thinking and chances that students will develop misconceptions in any chemistry unit. I hope that my musings will encourage you to examine your simplifications and consider whether you are facilitating deeper thinking in students or inadvertently doing the opposite. Like the duality implied in the opening lines of Charles Dickens’ A Tale of Two Cities, our methods of simplifying concepts can be both wise and foolish.

Which chemistry tale will you teach?

Thanks to Virginia M. Grossman, superintendent of Westampton Township Public Schools, for suggestions and edits, and for thinking of Charles Dickens when I first told her my ideas for this article.

Dusty Carroll teaches chemistry at Seneca High School in Tabernacle, NJ. She has been teaching high school chemistry for 15 years. She taught a graduate course for teachers at the University of Pennsylvania for four years, and she is currently a codirector of the University of Pennsylvania’s Chemistry Research Academy, where high school students from around the world learn research skills in a university laboratory for three to four weeks during the summer. Dusty has also served as an AP Chemistry test reader.