The path to the creation of Compound Interest, a site on which I create graphics looking at facets of everyday chemistry, was by no means a direct one. In fact, the decision to become a science teacher was one I made pretty late in my education. During the years prior to university, I excelled in English, and despite my interest in the subject, I found chemistry really challenging. Although it wasn’t a subject I was by any means academically brilliant in, I was fascinated by chemistry, and weighing up the potential employment options, as well as the fact that that my father was a successful chemist, I decided to pursue a degree in chemistry. For a time, after commencing, I doubted my decision—not because I didn’t enjoy the subject, but because there were aspects of it I found difficult. One thing I did particularly enjoy, alongside the practical aspects of the subject, was researching and writing about chemistry.

To this end, after graduation I applied for a number of science journalism roles but never heard back from anyone. In the meantime, I took a part-time role with the University of Bath’s student support center, taking lecture notes for students who, for varying reasons, were unable to do so themselves. It was during this time that the thought of teaching chemistry as a potential career was sparked, and I applied to a teacher training program for the next academic year.

It didn’t take long for me to realize that helping students with difficult concepts in the subject, and stoking their enthusiasm for it, was something I really enjoyed. I also turned out to be weirdly good at the planning and administrative side of things; whilst some of my friends were up until the small hours of the morning planning lessons, I found myself with time in the evenings to spare. Despite having gone into teaching chemistry on a whim, it felt like I found my calling.

During that first year teaching, one thing I loved to do, despite the extra time involved, was create my own resources for lessons. This was partly out of dissatisfaction with existing resources—not necessarily with their content, but with their lack of aesthetic appeal. The crimes of the resources I found online were numerous: worksheets plastered with the horrid specter of the Comic Sans font, or worse, judicious use of WordArt; layouts that made it look as if the various sections had been scattered at random across the page; or haphazard diagrams consisting of a veritable vomit of colors. If I didn’t find them pleasant to look at, would my students react to them any differently? 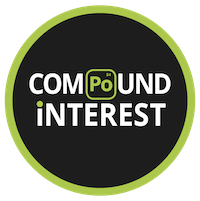 This formed part of the initial motivation for Compound Interest, which began during my first year of full-time teaching. I had a need for new classroom displays—the classroom I inherited was one of the oldest in the school, and whilst one wall was adorned with a giant periodic table, the opposite was dominated by bare, faded display boards. My immediate goal was to put something there that would prove as useful to my students as the periodic table on the opposite wall.

Eventually, I settled on making posters of the groups of elements on the periodic table providing general reactions and uses of each, but in the style of infographics, which have become popular in the past few years. These were some of the first images on Compound Interest. The website itself, however, started merely as a personal space for me to write about chemistry topics I found interesting. It was only after a few fellow teachers asked for copies of the elements posters that I shared them on the site for the sake of ease. And suddenly the site’s posts took on a more visual aspect.

View and download the element infographics in this issue's "Chemistry Fun" section.

Considering that the site probably only had a few people following it at that point, the reception of the complete set of elements graphics was fantastic. I supplemented them on the site with posts about another area of chemistry that really interests me—food! The success of the elements posters made me try a slightly different approach to traditional blogging. I produced for each food post a summary poster, which I also made free to download in case other teachers wanted to use them.

It’s now been about a year and a half since I started Compound Interest, and it’s grown far beyond my initial expectations. I’ve created more than 100 different posters on varying aspects of chemistry, which have been featured on many websites and publications, including ChemMatters and Chemical & Engineering News. I have also secured a book deal about the chemistry of food and drink, which will publish in the U.K. this October.

Of course, in light of this hobby, one of the most frequent questions I’m asked is how I have time to actually teach! I try to keep my planning and marking at school, staying later to finish it if need be, then I reserve a few hours in the early evening to work on material for the site. It certainly helps that creating the graphics is something I very much enjoy, so it’s by no means something that I see as a chore! I come up with most of the ideas on my own, though some are inspired by what I happen to be covering with my students at the time, whilst others are based on reader suggestions.

Some of my favorites are the one on different types of chemistry glassware, the one on the composition of different atmospheres in our solar system, and the one on the different molecule shapes predicted by VSEPR. I’ve used some in my teaching, too—for example, I made a blank version of the organic reaction map on the site for my A-level students, and I’ve also made teaching versions of the original elements infographics.

Being able to teach my pupils about the various facets of chemistry is great, and the graphics have also provided my classes with some interesting talking points. But, as a teacher, I don’t see the classroom walls as the limit. In the future, I’m hoping to continue to reach more people with Compound Interest and contribute in a small way to a wider public understanding of the seemingly difficult subject.