Roy Hayter, a chemist, has been an ACS Science Coach for about 10 years, working with 5th grade teachers at an elementary school in Palo Alto, California. He first recognized the potential of bringing experimental science into the classroom while volunteering for the ACS program, Kids & Chemistry.

Duncan MacMillan, a mechanical engineer, was already a volunteer at the same elementary school, supporting teachers in his children’s classes. The two volunteers overlapped in some classes, struck up a friendship, and have been cooperating ever since. Meanwhile, their teacher-partners, most recently Laura Schwarz, have welcomed them into the classroom and encouraged hands-on chemistry experiments.

Early on, the teachers whom they worked with requested a lesson, including hands-on experience, about the periodic table. They found constructing a lesson plan to be an appealing and exciting opportunity, and hope their experience will provide some useful ideas for other teachers.

Originally, our lesson about the periodic table began with a question-and-answer discussion of atomic numbers and the structure of atoms. The students then navigated a periodic table to find specific elements by atomic number. Elements were selected by the teacher or by students. They found each element’s name, atomic symbol, and typical uses. The students applied this knowledge by identifying elements shown in a chart. Lastly, the students discussed their results, observations, and conclusions.

During our initial lesson, some students showed glazed eyes — even more so than usual! Most students grasped the significance of atomic numbers and the progressive increase from atomic number 1 (hydrogen) to 118 (oganesson), as important aspects of the periodic table; but they were puzzled by the table’s usual visual display. Why the strange shape? Why are there gaps between hydrogen and helium and in the other periods, and why are all those other elements grouped below the table?

This demonstration starts by showing the fully assembled, nested Russian dolls, as a metaphor for oganesson, the element with the highest atomic number known to date. We explain to students that the element is very unstable, that only a few atoms have been made in the lab, and that it may explode at any moment! We then open (or “explode”) oganesson, the largest doll. The top portion of the doll is placed to the right (opposite oganesson) and the bottom to the left (opposite francium) in the seventh period of the periodic table. Figure 2 shows a student view of the demonstration.

We continue to open the nested Russian dolls one at a time, and place each opposite the successive period, moving toward the lower atomic numbers as the dolls get smaller. The students’ anticipation grows as they wonder how many dolls will emerge. There are just enough dolls for each of the seven periods of the periodic table. The smallest doll is placed next to hydrogen and helium. The stage is now set to begin a discussion of the basic principles that influence the periodicity and shape of the periodic table.

Starting with the bottom portion of the smallest doll, next to hydrogen, we inform students that its atomic number is 1, and it contains one proton and one electron. The single electron in hydrogen can take part in chemical reactions, as when it reacts with oxygen to form water, H2O. The next element, helium, atomic number 2, has two protons and two electrons. The two electrons in helium form a pair, a stable arrangement in a filled orbit or closed shell. Helium does not have any unpaired electrons, so it does not take part in chemical reactions. Now we move the bottom of this smallest doll to the right side of the table and close the doll. This is done to demonstrate that helium is a noble or inert gas. Leaving the closed doll placed next to helium, we move on to the next period.


The second period starts with a slightly larger doll bottom placed next to lithium, which has 3 protons and 3 electrons. Two electrons are paired and the third is a single outer electron, meaning that the chemistry of lithium is similar to hydrogen. Lithium reacts with oxygen to form lithium oxide, Li2O. Using the doll’s bottom, we count off the elements in this period, moving left to right, emphasizing that each element increases in atomic number (i.e., number of protons) one by one as you move across the period. Seven elements (and protons) later, we reach neon, with atomic number 10. Neon has 10 electrons to balance its 10 protons, and its electrons form stable pairs — 1 pair in an inner orbit or shell, and 4 pairs in an outer shell. Neon does not have unpaired electrons, and so it doesn’t take part in chemical reactions. We close the doll to show that neon, similar to helium, is a noble or inert gas, and then place it next to the neon symbol on the periodic table.


Moving on to the third period, we start with sodium, atomic number 11, which also has a single unpaired electron. Counting along this period, atomic numbers increase 1 by 1, until 7 protons and 7 electrons later we reach argon, atomic number 18. At this stage, the students begin to recognize the repeating pattern, or periodicity. We engage them by asking how they would expect sodium to react with oxygen and why argon is an inert gas. Additionally, as we move along the period, we ask students if they recognize any familiar elements, perhaps aluminum or silicon.


As the atoms become larger (with correspondingly larger atomic numbers), things become more interesting in the fourth and fifth periods. The additional electrons in these elements fit into larger orbits which are more complex and further from the nucleus. The outer orbits in these two periods are large enough to include 18 electrons, and so these periods are longer than the previous three. Again, we end the discussion about these periods by closing the dolls when we reach the noble gases, krypton and xenon. Throughout the demonstration, we continue to give students opportunities to spot familiar elements in the various periods, such as iron or silver. Additionally we engage student interest with related questions, such as, Why are the symbols for these particular elements different from the first two letters in their name?


The final two periods on the periodic table begin with cesium and francium, respectively. The atoms in these periods are larger still than those directly above them. Both periods 6 and 7 have room for a total of 32 elements (14 more than periods 4 and 5 did). The closure of the last Russian doll at element 118, oganesson, completes this demonstration. The students now understand why a vertical group of elements, from helium to oganesson, can be represented by the seven closed dolls and all share the properties of a noble gas. Oganesson is predicted to be a member of the noble gas family of elements, although possibly a solid! We take this opportunity to point out that other vertical groups of elements have similar properties, such as the alkali earth metals and the halogens.

Identify Your Elements was a highly engaging and collaborative lesson for my students, whose excitement was a joy to watch. Chemistry can be a tough topic, but in our experience, every student learned something. Some students enjoyed this “puzzle-like” project so much, they were inspired to get their own kits to discuss at home! — Laura Schwarz

Following the demonstration, students use their newly-acquired knowledge of the periodic table to complete a chart from the lesson plan, Identify Your Elements. The chart gives one piece of information for each element (element name, symbol, atomic number, uses, or products), and the students use The Periodic Table of the Elements, in Pictures as a reference in order to complete the chart. While interacting with this periodic table, students are encouraged to recognize elements by their appearance, as this will help them in a subsequent part of the lesson where they will be tasked with identifying a mystery sample.


After the chart has been completed, samples of each of the seven elements that are identified on the worksheet (iron, copper, silicon, aluminum, zinc, lead, and carbon) are given to students for their analysis. They are then presented with a mystery sample (a penny), which is made up of a combination of two elements — copper and zinc — both of which are among the seven elements already observed. Students are challenged to identify the two elements in the mystery sample. Lastly, the students discuss their results, observations, and conclusions. Additionally, some teachers may want to incorporate a song into the closure of the lesson‚ for example, “The Elements,” by Tom Lehrer.

We have continued to improve this lesson in order to keep our students engaged. The use of the Russian nesting dolls has invigorated what might be a dry discussion, in our experience, and has been a beneficial addition to our teaching strategy. 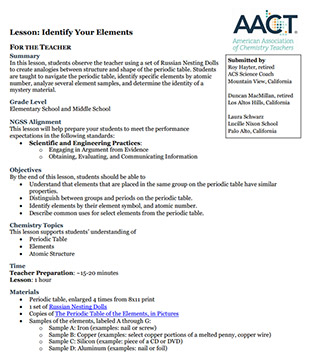 Roy Hayter has served as a volunteer ACS Science Coach in elementary schools for more than 10 years. Before he retired, he had a varied 30-year career as a chemist doing industrial research, mostly with Shell Oil Company, on the use of organometallic catalysts to produce rubbers and plastics.

Duncan MacMillan is also a volunteer ACS Science Coach in elementary schools, having retired from a career as a mechanical engineer at a Silicon Valley start-up.

Laura Schwarz teaches fifth grade at Lucille Nixon School in Palo Alto, California. She has brought her deep passion for engaging students in the study of math and science to the classroom for the past eight years.