This is the second in a series of articles about integrating earth chemistry topics into the curriculum.

Welcome to another article on strategies for including chemistry of the earth in your chemistry class. This article will build on my earlier article, and this time we will take a phenomenon-based approach to connect a subject that you already teach — density — to earth chemistry. Starting with an observable phenomenon, rather than a general topic, can help students realize the purpose of study and also encourage them to generate their own questions to investigate about the phenomenon. This is also a practice recommended by the Next Generation Science Standards (NGSS).

Our phenomenon is this: if we were to remove earth’s oceans and look only at the land surface, we would find that two average elevations dominate, with much less surface area at other elevations. This is visible in Figure 1, which shows large areas of higher elevations (in red) and lower elevations (in green), but generally smaller areas of in-between elevations (in yellow). We particularly notice that many of the yellow areas around the continents are narrow, indicating a fairly rapid transition from the higher elevations to the lower ones.

These elevations would exist regardless of whether the earth had oceans or not, yet we can see that the green, yellow, and some orange areas are where the oceans are. This shows us that when it rains, the water runs off the red, high areas, and collects over the lower-elevation areas to fill the existing depressions and form the big “puddles” we call oceans. With the ample water we have, if earth didn’t have low areas to collect the water and higher areas above those depressions, everything would be covered by water, and we would have no dry land to live on! This fact about earth is important for human existence.

So, our main phenomenon question to engage students in this investigation is: Why are there two main elevations on earth, and how has chemistry influenced this? With this start, work with your students to step through multiple science practices (as NGSS reminds us), by first getting students to ask questions that they think will need to be answered. This can lead to additional practices in your class: analyzing data and constructing explanations. You may get lots of questions—hopefully, including some that appear below.

One first derivative question can be: What are the outer layers of earth made of, anyway? Obviously, rocks. From the previous article, we know elements make compounds that are minerals, and minerals aggregate to make rocks. Your students will probably remember the three main rock classes from elementary or middle school grades: igneous, from melted magma; sedimentary, from turning weathered sediments into rock; and metamorphic, which have been changed by heat and/or pressure to create new forms. These will come up as we work on further questions.

This quickly gets to our second question: Is there a relation between the red and green elevation areas we see in Figure 1 and the rock types found in those areas? Though all three of the rock classes mentioned above occur on both the red and green elevation areas, geologists can characterize the composition of the red and green areas using two major igneous rocks: the red areas in Figure 1 (and surrounding orange and yellow areas) are a composition we can generally call granitic, while the green areas in Figure 1, along with the yellow in the middle of the ocean areas, are basaltic composition. These two compositions make up the outer layers at the surface of earth we call crust. Given their positions compared to sea level, we call the higher, granitic crust continental, while the lower, basaltic crust is called oceanic.

Now we need to connect the geology with the chemistry: How are the granitic and basaltic crusts different chemically? To answer this question, we will use the information in Figure 2. Names for common igneous rocks often come in pairs that have the same mineral (chemical) composition, but are different in whether they cooled from a melted state underground (called plutonic), or they erupted from a volcano and then cooled at the earth’s surface (sensibly called volcanic). We can use either rock name in the pair when we want to talk about the chemical composition, but it will be easier to stick with the common names we have used so far: granite and basalt.

Across the top of Figure 2, the first line of text shows the volcanic igneous rock names, and the second line shows the plutonic ones; you can find granite and basalt in the red boxes. The diagram part of Figure 2 shows the relative amounts of different minerals that go with the rock names, and how they vary. The larger the amount of color on any vertical part of the chart under a name, the larger the amount of that mineral is present in the rock. All of these minerals are the common silicate minerals mentioned in the previous article, which make up most of the crust of earth. As will become clear below, their differing densities affect the phenomenon we’re discussing.

We can see that granite is largely composed of orthoclase (a potassium feldspar), quartz, sodium-rich plagioclase, and muscovite. These we can group together as felsic minerals. Granite also has lesser amounts of biotite and amphibole, which are examples of iron- and magnesium-bearing mafic minerals. On the other hand, basalt is largely the mafic minerals pyroxene and olivine, along with some calcium-rich plagioclase. To be correct at this point, we can say the continental crust has a composition encompassing all the rocks in the left half of Figure 2, but we will call them granitic for convenience, and they’re definitely more felsic than basalt.

It’s important to understand that all of the crust of earth is “floating” on the mantle layer below, which is not liquid. Instead, the crust has a solid but deformable consistency, often described as “plastic” in reference to how it may modify its shape but not its composition. That makes the mantle similar to modeling clay or peanut butter —solid, but able to change shape (though to be clear, the mantle is much more dense and slow-to-deform than these two analogies). Recognizing that less dense materials float on more dense materials, we see a good next question could be, How do the chemical composition of granite and basalt affect their density, and thus how they float on the mantle? To answer this, you can use the data in Table 1 at any level of detail desired for your class.

Table 1. Granite and basalt compositions broken down by specific mineral and rock densities. Source: https://www.thoughtco.com/densities-of-common-rocks-and-minerals-1439119. For mineral groups with a range of densities, averages have been used. Table cells with an * indicate this mineral is not significant in the composition of this rock type.

The bottom line of Table 1 shows that granite is less dense than basalt overall. Further examination of the table can show that this is because felsic minerals are generally less dense than mafic ones, which in part comes from the mafic ones containing higher-density elements like iron. If you want students to see or do calculations involving the contribution to rock density by the percent compositions of each mineral, they can also refer to those columns of the table. If you are able to obtain samples of granite and basalt (be sure the latter does not have holes from gas bubbles in the lava), you can try experimentally to verify their difference in density. This might be a good opportunity for students to develop their own procedure to collect the needed data for the calculation.

We can conclude that dense basaltic crust floats lower into the mantle while less-dense granitic crust floats higher, and with this answer we can now explain our initial phenomenon, based on the chemistry of the crust types: There are two main elevations on earth because there are two types of crust of differing densities floating on the mantle below. So, this effect we see in our planet depends on this chemical property of the rocks of the crust. It’s worth mentioning that continental crust is also thicker, especially under mountain ranges, while oceanic crust is thinner, and these facts also contribute to their elevations.

To complete this discussion on density, you could also use Figure 3 to help students discover that the entire earth system is arranged by density from the core of the planet to the top of the atmosphere. Density values in the earth vary with depth, so this figure shows the overall picture with average densities. Note that the specific values are less important than recognizing the sequence.

It’s interesting to see the physical and chemical reasons (i.e., both how and why) that densities vary, or don’t, within earth system “spheres”:

These considerations of density in the earth system relate directly to HS-ESS2-3 as the major cause for earth’s layers. Though density is otherwise mentioned seldom in NGSS (e.g., MS-PS1-2, and MS DCI ESS2C), I expect discussions and labs on density remain common in chemistry classes because it is an important basic concept needed to understand larger concepts in performance expectations. Study of the phenomena in this article can build on the exercises you already do on density in your lab, and can take the density discussion with your students beyond the lab to include engaging applications that affect the whole earth and how we live on it.

Even though we have answered our original phenomenon question as stated, it would be easy to have another question after this study: Since we see granitic and basaltic rocks making up the surface of earth, how did those rock types get separated to make the two different types of crust? The short answer is by the chemical process of fractional distillation done by the actions of plate tectonics. It turns out this process also has important effects on how volcanoes erupt, explosively or not, so we will examine that chemically-controlled phenomenon and its mechanisms in the next article, which will also build on what we have seen in this one about the chemical composition of rocks. 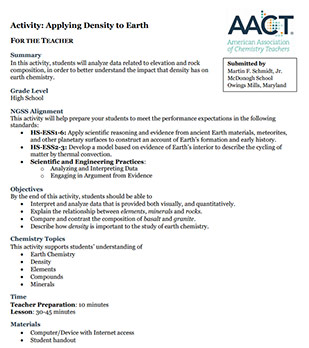 Martin F. Schmidt, Jr. has been teaching science to 9th through 12th grade students at McDonogh School in Owings Mills, Maryland since 1978, including physics, chemistry, and earth sciences. Recently he has been providing professional development for teachers to help integrate earth sciences into other disciplines. He is author of the book, Maryland’s Geology, and enjoys helping people make connections to the planet where we all live.