This is the first in a series of articles about integrating earth chemistry topics into the curriculum. Future articles in the series will go into more depth about the earth’s chemistry processes, especially chemical reactions such as oxidation, hydrolysis, and others.

When students in your chemistry class see an image of Earth, do they see a large sphere of interacting chemicals?

Such an outlook can provide a broadened perspective on the importance of chemistry. Plus, it’s a really interesting real-world connection to the chemistry content our students are learning.

Helping students realize that the earth system is where we get all of the elements, and therefore the resources we use every day, can be an engaging challenge. A bit of earth’s chemistry is currently incorporated in the typical chemistry curriculum — some by intent and some almost by default. You can also teach a lot more information, however, that is fascinating, important, and relevant. Table 1 shows various earth science aspects that fit well with topics already in chemistry curricula.

After starting with a discussion of some fundamentals of earth chemistry, future articles in this series will explore various applications, such as how earth chemistry provides the elements that make up our bodies and the continents we live on. I’ll also investigate why some volcanoes erupt relatively safely, while others explode. All of these applications can take chemistry beyond the lab, and allow it to be applied to much broader topics.

Some chemistry teachers are being assigned to teach the Earth & Space Science Performance Expectations (PEs) for the Next Generation Science Standards (NGSS) within their chemistry curriculum. In this series of articles, I would like to help my fellow teachers by identifying some of the remarkable earth-chemistry connections and how they can be integrated into the curriculum.

For example, an NGSS PE such as HS-ESS1-5 (on plate tectonics) can be taught through the lens of chemistry. The subject of plate tectonics becomes very relevant when we recognize these forces have been acting as a chemical refinery for billions of years, separating and concentating earth materials, and in the prcoess making them available for living things. HS-ESS2-1 examines earth’s internal and surface processes, which by necessity also requires understanding the chemical materials involved in these processes. And of course, chemistry courses already include the study of water, so HS-ESS2-5 (on water’s effects on earth materials) is a relevant discussion.

Table 2 includes some of these NGSS items, and reflects the perspective that chemistry, as the study of materials around us, should include the natural earth materials on which we, and all other life forms, depend.

An important concept students will need to understand is that elements combine to make minerals, and minerals combine to make rocks. Technically, a mineral is defined as a crystalline solid with a fixed composition (sometimes variable within limits), naturally formed by inorganic processes. In short, it’s a naturally occurring compound; since compounds are fundamental to chemistry, the ones that occur naturally would be an obvious fit for chemistry study.

Rocks are defined as an aggregate of minerals, with allowance for other materials that make up a significant part of the earth. Understanding the definitions, students can categorize ice as a mineral, noting that it has a much lower melting point than the minerals we find in most rocks. Rocks can be added to your examples of mixtures. The “other materials” identified in the definition allows for materials that are rocks, but technically do not contain minerals; for example, coal is a rock, but has no minerals because it is organic; meanwhile, obsidian is also a rock, but is a glass and therefore is not crystalline.

Many of the compounds used in chemistry class are actually naturally occurring — so not only can they have chemical names, but also mineral names! In fact, the minerals and their properties were named, known about, and used for centuries before their elemental compositions were discovered. It can be interesting for students to learn that many of the compounds they have been studying don’t just come from bottles, but instead can be found in the natural world. Table 3 gives some examples.

You can find more examples if you visit Mindat.org, select any two elements from its periodic table that might combine, and run a search. You will probably get more than just minerals composed of only two types of ions, unless you exclude some or all other elements. In any case, Mindat.org, an outreach project of the Hudson Institute of Mineralogy, is a large and authoritative source on minerals, and therefore on earth chemistry. I encourage you to explore it to see its wide variety.

But minerals like those identified in Table 3 make up only about 10% of earth’s crust; the much larger proportion, about 90% of the crust, is made of silicate minerals — that is, materials that contain the combination of silicon and oxygen.2 These have been omitted from every introductory chemistry book and course I have seen, yet it would make obvious sense to include materials that are so abundant, and that make up most of the chemistry of what is under our feet. See Table 4 for a list of the most common silicate minerals and their chemical formulas.

We can immediately see one reason why chemistry classes haven’t included these minerals: first, these formulas can be complicated, and second, there are thousands more silicate minerals, often with even more complex formulas! Using this list as a resource, we can ask students to look for commonalities that allow us to generalize the compositions:

So we can conceptually simplify the Table 4 formulas to “Si and O plus one or more metals.” Which metals are included is the basis for separating the felsic silicates from the mafic silicates, a distinction we will see has many effects on the properties of these minerals and where we find them. But now that we know there is a chemical formula that goes with each mineral name, it will be easier to simply use the mineral name to refer to that composition, rather than trying to construct a chemical name or remember an exact formula.

Students can also analyze the abundance of the elements present in silicates as suggested by the subscripts in the formulas. Which element seems to occur the most? The answer is oxygen, and your students may be surprised by this! Although oxygen is in the air, it turns out it is very abundant in rocks as well. Table 5 will inform your students of how spectacularly abundant oxygen really is. You can also see some pie charts of abundances on the Sandatlas website.

As a chemistry teacher, your discussions of chemical bonding with students likely already includes checking electronegativity tables to determine if ionic or covalent bonding is occurring. Comparing the electronegativity values of silicon and oxygen shows that their bond falls near the middle of the ionic-covalent continuum, and so they make a polar covalent bond, with electrons attracted more toward the oxygen atoms. However, silicon and oxygen arrange themselves in a tetrahedron known as silica, an anion with a net charge of -4, consisting of four oxygen atoms around each silicon atom, as shown in Figure 1.4 This is why oxygen is such a large volume of the minerals in earth’s crust. From all these abundance numbers, we can reach the counterintuitive conclusion that most of the oxygen on earth is in the rocks, not in the air — and when we walk around on soil and rock, we’re actually walking on a lot of oxygen atoms!

Also, point out to your students that carbon and silicon are placed in the same group on the periodic table. Challenge students to consider what this means about the behavior of these elements. Both carbon and silicon arrange themselves easily into a variety of shapes — chains, rings, sheets, and 3-D networks. It is interesting to see the parallels between organic carbon compounds and inorganic silica-based minerals.5 The tendency of carbon or silicon to make these various shapes can be the result of strong intermolecular forces. In high-silica materials in particular, this tendency has a big effect on the behavior of volcanoes, as we will see in later articles in this series.

And as we always teach our students, the shapes of the molecules that form have important effects on the behavior of the materials. We see this in many organic compounds, and also see it in minerals, where the crystalline shapes at the atomic level will influence the crystal shapes we see in a mineral hand sample, and planes of weakness in the crystal structure can give smooth, flat cleavage planes in minerals. Network crystals of both carbon and silica give very hard and reaction-resistant solids: diamond for carbon and quartz for silica. Quartz, incidentally, is the most common mineral with a high resistance to weathering because it is non-reactive, so it is the mineral that makes up many river stones and most sands after everything else has disintegrated. So the similar properties of carbon and silicon place them next to each other in the periodic table, and thus illustrate the connections between the carbon-based organic and silicon-based inorganic chemistry worlds.


Along with the silicates, it’s worth noting one more important group of minerals that is common in the crust: the carbonates, especially calcite, CaCO3, and dolomite, CaMg(CO3)2. The carbonates can precipitate out of seawater inorganically if the concentrations of the solutes become high enough. Carbonates are also formed by animals for shells and skeletons, and this is a major source of carbonate deposition. Carbonates make the sedimentary rock limestone, which can be metamorphosed into marble with little change in composition. Since we have carbon in this mineral, it also becomes related to the natural carbon cycle, and so these minerals may absorb carbon mainly from CO2 as they form and then later release it as they weather. This type of biogeochemical cycle is another example of how earth is chemically active, and can apply to NGSS PE HS-ESS2-6 as part of the carbon cycle.


So there’s lots of interesting earth chemistry that is a natural and relevant fit for introductory chemistry courses. Watch for the next installment of this story, on how and why common minerals discussed above combine to form igneous rocks — those that come from melted mixtures of elements and that are our fundamental sources of earth materials. We can then discuss how the compositions of these rocks affects their densities and other properties, and the important consequences of this chemistry on how we live on earth. 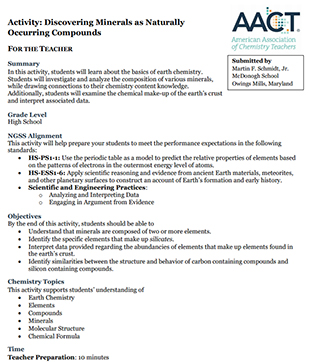 Martin F. Schmidt, Jr. has been teaching science at McDonogh School in Owings Mills, Maryland, since 1978, including physics, chemistry, and earth sciences. He is the author of the book, Maryland’s Geology, and enjoys helping everyone make connections to the planet where we all live — especially teachers working to fulfill expanded earth science understandings needed for NGSS.