It was my senior year of high school, I had spent the first semester struggling my way through AP Calculus. Integrals finally broke me, however, making me decide to swear off math (and consequently, science) for my future, and instead decide to study liberal arts, political science, and ultimately law.

Or so I thought. I had succeeded in securing a full scholarship to the University of Colorado, was enrolled in the Air Force Reserve Officer’s Training Corps, and figured my future was set, free of those scary integrals and differential equations. I had fallen victim to a trap that I now find all too many of my own students also falling into: thinking I should pursue only that which came easily.

Too often in my career as a student, I was praised for my successes and the things that I did well, and (although I didn’t dare admit it at the time) the things into which I didn’t have to put much effort in order to pass with grades just slightly above average. It took me another 10 years to realize that my passions and drive would ultimately bring me back to the same AP Chemistry classroom in which I had sat, some 18 years prior.

From liberal arts back to the sciences

Political science suited me. I was successful at writing decent papers, giving speeches, and talking my way through innumerable recitations and briefs. I quickly found myself faced with the beginnings of a successful career as an Air Force officer, and perhaps eventually law school and practicing law. But I was bored to tears by it.

I didn’t realize it at the time, but I found that being good naturally at something wasn’t enough for me, and that I had eschewed the challenge that I craved. 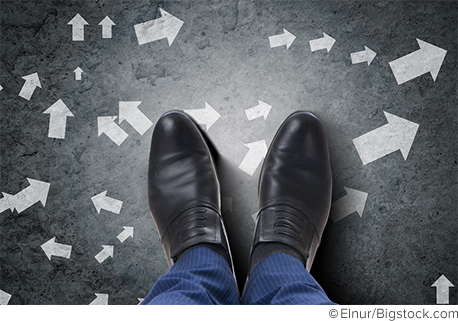 After winding my way through my early twenties, I found myself disillusioned, unhappy, and unsatisfied with where my life and choices had taken me. It was an emergency medical technician (EMT) course and a random decision to sign up for a chemistry course that changed my life forever, directing me on a path that led into the classroom.

I had decided to become a paramedic due to the fast pace, high stress, glamour, and heroism I saw in the profession, and was excited by the science behind the ambulance-jockey lifestyle of EMTs. And, perhaps most importantly, it was HARD. Courses in pathophysiology and pharmacology were a far cry from the international relations, military intelligence, and strategic briefings that my life had become, but I reveled in the challenge and found myself engaged and feeling rewarded. My EMT career was short-lived, however, because I found myself wanting more — and so I enrolled in an organic chemistry course.

Now remember: I hadn’t so much as touched a chemistry lab at this point for almost six years, not to mention encountered things like stereoisomerism or anti-Markovnikov reactions. My head was SPINNING! But the things that kept me afloat were some great classmates, an amazing professor, and a classroom synergy unlike I had ever encountered.

My instructor, George Tessmer, was a retired Air Force officer, a pedigree that earned my trust and enthusiasm. But he was unlike any of the stiffened officers I’d met: he was relaxed, positive, and incredibly enthusiastic about not just chemistry, but also teaching chemistry. In addition, unlike most of the college courses I’d taken by that point, almost everyone in that lab was returning to school or paying their way through school toward a career goal. These factors led to so much buy-in and dedication that, 12 years later, I can still picture some of the amazing experiences I had there. I was saddened to learn some years later that Professor Tessmer had died from heart failure, but his dedication to the craft of making difficult chemistry accessible, exciting, and engaging made a huge impact that I didn’t even realize at the time.

From those auspicious days in the organic chemistry lab, I was hooked and quickly decided to pursue a degree in chemistry, although I didn’t yet know where it would take me. While part of me still clung to my EMT training and yearned to enter medical school, another part had firmly fallen in love with the lab. I didn’t know it then, but an even more powerful part of me had already begun to form another, different idea of how I’d contribute to the chemistry field.

At this point, however, I was a divorced dad, working several part-time jobs to make ends meet and studying chemistry, all of which made things difficult. Again, I found myself facing a very different paradigm than my younger days of barely trying and acing classes. Now I was working hard for B’s, and feeling more proud of the red ink that often covered my endless lab reports, because I knew the effort I had put into them. I even found integral calculus to be rewarding, although no less challenging than when I faced it as a senior in high school.

I was able to work my way into an undergraduate research position with Dr. David Weiss at the University of Colorado at Colorado Springs (UCCS), and received incredible mentoring from him and my instrumental analysis instructor, Dr. Laura Zimmerman. Both showed me the powerful combination of scientist and educator, and how influential having a passionate teacher and mentor can be on a student.

I loved research, delving into topics ranging from microfluidic cytometric analysis, to green tea catecholamine extraction, capillary electrophoresis of urine samples to extract phenylalanine metabolites (which has supplied me with an endless stream of ‘pee jokes’ to rely upon in the classroom ... no pun intended!). But I often found myself most looking forward to opportunities to share science and chemistry with those around me. Whether it be tutoring, or just having a chat with a friend over coffee, sharing my enthusiasm for chemistry became a driving factor in my seeking out a teaching program concurrent with my chemistry studies.

Fortuitously, UCCS had just begun a mirror of the University of Texas’ UTeach model, sponsored by the National Math and Science Initiative, which specialized in encouraging burgeoning math and science professionals to also become teachers. Quickly I found myself in the classroom, engaging students, and LOVING it! As I’ve grown fond of telling my students, I’d realized that doing research was fun, but I really found my niche when I got to “geek out” with a classroom of students.

Back to where it all began 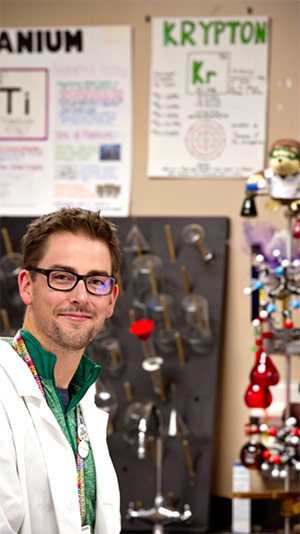 Having now taught high school chemistry for five years, I find each class, and each year, more rewarding than the last. This year has been especially poignant because I have had the humbling honor to asked by the AP Chemistry teacher I had as a high school student to return to Thomas B. Doherty High School in Colorado Springs to succeed her after her retirement.

While I didn’t realize it as a 17-year old student, Dr. Julie Furstenau had a profound impact on me then, inspiring me both by her love for chemistry and her sheer, unabashed, nerdy glee for science — a passion I now try to bring into the classroom each and every day. Standing in the same spot that she stood, looking at the same seats in which I had sat as a student, has been surreal, to say the least.

But I’m continually grounded by my own challenges and successes as a student, and by the long and winding path that brought me back to the chemistry classroom. And then I am emboldened by the hope that I can provide some encouragement and support to my students, even if it takes them many years to figure out their path, just as it did for me.