Lightsticks glowing in the dark are presented in the chemical literature as tools for learning for preschool and elementary children, 1 middle and high school students, 2 and students studying introductory chemistry and advanced chemistry at the undergraduate level. 3–5 The theory of light generation and the mechanism and details of the chemiluminescent reaction have been widely studied and reported. 6–11

One aspect of the lightstick reaction widely used for students’ study is the easily-observed variation in brightness and temperature of the glow which, depending on the level of study, may be related to reaction rate. 1,12,13 This article seeks to advance previously described student investigations of the activation energy of the chemiluminescent reaction in a lightstick, a major factor determining the rate.

In a classic article on lightstick kinetics, Basam Shakhashari and his co-authors addressed the chemiluminescent reaction, its mechanism, and theoretical values of the activation energy, represented as E a. Shakhashari invited suggestions by readers for “a convenient way by which students could obtain the energy of activation for the reaction.” 6 Later, he reported determination of E a using the Arrhenius equation, by measuring the light intensity of a lightstick immersed in temperature baths of several different temperatures (-5 – 50 oC), though the details of the determination were not described. He reported a value of 56.4 kJ. 14

Years later, Bindel picked up the mantle and measured the light intensity or luminous intensity, (I), of a lightstick continuously as the temperature changed over a range, using a specially-built wooden box, computer, and interface.15 Subsequently, Roser and McClusky described a similar procedure using the Texas Instruments Calculator-Based Laboratory (CBL) to measure light intensity and temperature.16 Both of these methods used the logarithm form of the Arrhenius equation to calculate Ea.

The update addressed here describes a guided inquiry approach adapted for first-year secondary school chemistry students using the Vernier LabQuest 217,18 and spreadsheet software to determine the activation energy of the reaction of interest. The investigation is undertaken after students have competed their initial study of kinetics, which does not include the Arrhenius equation.

In the introduction to the investigation, students are tasked with determining the activation energy of the chemiluminescent reaction in a lightstick, and given the linear (natural logarithm) form of the Arrhenius equation in terms of light intensity. They are also given a list of materials that includes lightsticks, 19 duct tape, a flat, unassembled 8”x8”x8” cardboard box, 20 a hot plate, and a LabQuest 2 with light and temperature probes. Students should already understand that the glow of a lightstick dims when cooled, and should also be able to collect data with probeware and use software to create trend lines.

Given the task, “Determine the activation energy of the lightstick reaction,” students must apply algebra to discover/recognize the “y = mx + b” components of the natural logarithm form of the Arrhenius equation, as in:

At this point, students can use their materials to design an investigation to obtain the needed data. After answering Day 2 Prelab questions (included in Supplemental Materials), the class engages in a teacher-led prelab discussion. The teacher should lead a discussion about whether and how to heat or cool the lightstick, as well as temperature range, time of gathering data, and aspects of the students’ box assemblies. Depending on the time available, teacher input from the literature cited above or previous years’ investigations can guide students toward gathering useful data on the first or second run. As each run of recording light intensity and temperature simultaneously requires only 5–10 minutes, more than one run may be completed during a lab period. A detailed sample procedure (for the benefit of the teacher) is included in the Supplemental Materials. As time is available, students can refine and repeat their experiments to check for reproducibility, an R 2 value close to “1,” and agreement with an accepted value.

There are two assumptions made here: first, that the light intensity varies directly with the reaction rate 15; and second, that the change in light intensity is due only to the change in temperature. Specifically, it is assumed, as has been shown in the literature, 15,16 that any change in rate due to change in reactant concentration is negligible when data is gathered over a short period of time. As these lightsticks are 12-hour sticks used for approximately 30–40 minutes, this seems to be a reasonable assumption; but students should still be aware of it. 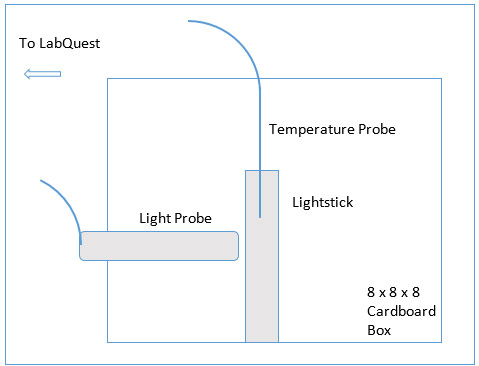 Figure 2: One possible assembly for data collection. A flat cardboard box is unfolded and taped with duct tape. Holes are made for probes. After arrangement of lightstick and probes, the box is taped shut.

The time, light intensity, and temperature data gathered are either imported into a computer using LoggerPro17 or emailed from the LabQuest 2 to each lab partner. The data is then copied and pasted into a spreadsheet and processed. For our students, practice with probeware and spreadsheets is a valuable aspect of this investigation. Students are instructed to find the R2 value for their trend line and to show the calculation for Ea from the slope. Lab report requirements are included in the Supplemental Materials.

Results obtained from lab groups range from 53.0 to 74.0 kJ using light intensity data collected as the lightstick cooled from approximately 65⁰ to 35⁰ C, with an average value of 58.6 kJ.

Students should wear goggles, aprons, and gloves for data gathering. The Cyalume lightsticks used are phthalate-free and may be disposed of in the wastebasket, but can potentially stain clothing. Care must be taken when cutting off the top of the lightstick, so the instructor may wish to cut off the tops for the students.

This investigation has primarily been used in the first-year Honors Chemistry (Pre-AP) course, but could be considered for any college preparatory first-year chemistry course. It aligns with several 9–12 Science and Engineering Practices of the NGSS, especially “Planning and Carrying Out Investigations,” “Analyzing and Interpreting Data”, and “Using Mathematical and Computational Thinking.”

It provides an extension of HS-PS1-5 concerning the effect of changing temperature on reaction rate. This investigation has also been used in a second-year advanced topics elective. It aligns with several aspects of the AP Chemistry Course Description, including from EK 4.A.3.d, EK4.B.2.c, and E.K. 4.B.3.c from Big Idea 4, as well as Science Practices 2, 3, 4, and 5.

Though the actual chemiluminescent reaction6 was not initially presented to students, it is included with material given to them during the course of the investigation and is useful to review the study of the production of light by the movement of electrons. (See “Information on Chemiluminescence for Students” in Supplemental Materials.)

The supplemental materials provided for the presentation of this investigation at the Georgia Independent School Association fall conference (November 6, 2017) included all student handouts and detailed procedure page for teachers, as well as these downloadable documents:

The authors thank the Armed Forces Communications and Electronics Association, Fort Gordon Chapter, for the Science Teaching Tools award, which provided the seed money for this investigation, and the 2016-2017 Honors Chemistry class of Westminster Schools of Augusta for their very able participation in data-gathering. 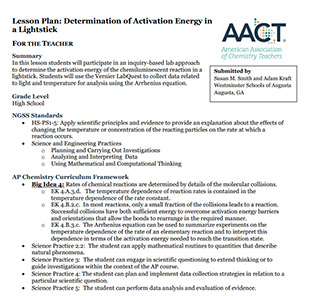 Susan M. Smith is a retired chemistry teacher from the Westminster Schools of Augusta. During her career, she taught College Prep and Honors Chemistry for 29 years and AP Chemistry for 17 years. She served as Science Department Chair and lead coach for Science Olympiad, and was also part of the Science Bowl coaching staff. In 2011, she was selected as Chemistry Teacher of the Year by the Southeastern Region of the American Chemical Society.

More from these Authors