Read! But Read the Right Things

Ahhh, summer reading lists for chemistry teachers. If you’re familiar with my work, you are probably aware that I value focusing on chemistry content much more than educational pedagogy. And so, my own personal reading list is purely about chemistry, a singular love for the subject, and how it informs my work.

What follows is not so much a “list” as it is a few thoughts about two books that I have recently read, and how they have influenced my work. I’ll give a brief synopsis of each, but also try to convey how these books have continued to help me reflect upon the reason I’m a chemistry teacher — i.e., chemistry! If that last sentence seems familiar to you, it may be that you happened to read my earlier AACT article entitled, "Reviving the Reason for My Work." In that piece I discussed how a stint at the Chemical Heritage Foundation (CHF) helped rekindle a love of the subject in me.

As I noted in that earlier article, clearly not everyone is going to be lucky enough to be afforded such an opportunity, but that’s where these books (and of course a whole host of others) come in. In an entirely different way, reading can provide a similar fillip to the one that I found at CHF — a little chemical boost, if you will — and the summer represents a great time for teachers to immerse themselves in such an indulgence.

A Tale of Seven Scientists and a New Philosophy of Science, Eric Scerri, Oxford University Press 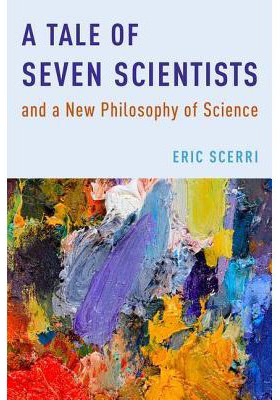 Eric Scerri is a scholar who works at UCLA, and a friend of mine. His research is chiefly in the field of the philosophy of science, where he concentrates on the history and philosophy of chemistry in general, and of the periodic table in particular. Seven Scientists is a follow-up to his book, A Tale of Seven Elements, in which he discussed the discovery of the final seven elements of the first ninety-two that followed Henry Moseley’s work on atomic number. I highly recommend that work as well.

In Seven Scientists, Scerri lays out his argument that science is far from a series of Kuhn-like revolutions, but rather a series of biology-like evolutionary steps. In his view, such a progression not only takes much longer to come to fruition, but is also characterized and advanced by all kinds of theories that ultimately prove to be incorrect. That may sound like nothing new — scientists having many theories and making lots of mistakes before making some monumental, earth-shattering breakthrough — but that’s not at all what Scerri is getting at.

A Tale of Seven Scientists and a New Philosophy of Science.
Find it at a library near you.

Rather, he sees the advancement of science (and in particular the development of atomic theory at the beginning of the 20th Century) as a single, organic being, where the traditionally thought-of giants — Thomson, Rutherford, Bohr, Schrödinger, et al. — are actually just part of a bigger “biological” scientific machine. Their lauded work, while clearly critical in the process, was only made possible by the work of “the little people” of whom most have never heard.

Scerri is not simply trying to bring these other obscure physicists and chemists to the fore in order to give them their due; rather, he is making a far broader argument. Scerri says that these less well-known figures are part of an evolutionary process of chemical theory that stands in direct opposition to a paradigm-shifting revolutionary one that tends to elevate a small number of figures to superstar status. It’s an emphasis on the scientific organism over the individual genius.

If the truth be known, despite Scerri’s pretty convincing argument, I’m not that interested in the deeper philosophical point he makes in the final chapter of the book. That may horrify Eric, since the point of the book as a whole is clearly about making that argument. But the real beauty of the book is that you don’t necessarily need to share his enthusiasm for the philosophy of science in general, or even his specific position within it, in order to profoundly enjoy the stories of the seven scientists whom he highlights.

There’s a ton to amaze and surprise in chapters 2–8, where Scerri tells the individual stories of John Nicholson, Anton Van den Broek, Richard Abegg, Charles Bury, John D. Main Smith, Edmund Stoner, and Charles Janet. These vignettes stand on their own as separate and interesting tales, and they can easily be enjoyed and appreciated outside of the larger context of the book. Among the gems are the influence that Stoner had on Pauli and ultimately the Exclusion Principle; Janet’s fascinating versions of the periodic table/system; the fact that Main Smith was the actual source of the rearrangement of periodic table that is usually attributed to Glenn Seaborg; and Bury’s work on electronic configurations and his role in christening the transition metals. Each of these stories reminds us of one simple truth that Scerri expresses thus:

My main point, once again, is the organic and evolutionary way in which science develops. It is only in retrospect that priority is attributed to certain contributors. Given our limitations in attempting to reconstruct what is a highly organic and interconnected growth process, it is hardly surprising that we tend to simplify the story by latching onto the leading players in any particular scientific episode.

Scerri reminds us teachers that any simplified presentation of a historical account is not only hopelessly inadequate, but also potentially places way too much emphasis on certain individuals and revolutionary “eureka” moments. A good example of this point is the neat and tidy transition from Democritus, to Dalton, to Thomson’s plum pudding model (a term, by the way, that Thomson himself apparently never used!), to Rutherford’s nuclear model, to the Bohr atom, and ultimately to Schrödinger and quantum mechanics. As teachers at this level, we have to present such ideas in this bundled, orderly manner as a matter of pure pragmatism. Even so, we should be reminded that all of the chemical theories and models we present are equally flawed, and that we should view all such absolutes in chemistry with a skeptical eye.

In the final analysis, I found Seven Scientists to be an absolutely fascinating account of the work of seven men. Their work and stories certainly help to illustrate Scerri’s larger point, but also stand equally as engaging tales of chemistry on their own. Not only that, the philosophical point Scerri makes is one that as educators, we would all do well to heed.

The first thing that I thought of when I picked up Derek Lowe’s The Chemistry Book was: damn, I wish I had been asked to write that! I think that the research would have been absolutely fascinating to do. 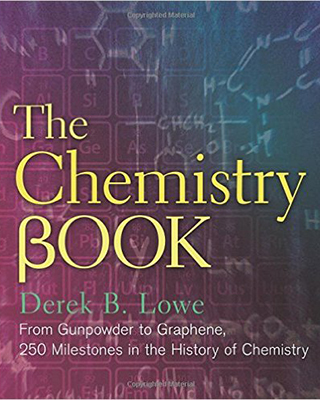 I’m sure that Lowe, even as a very experienced chemist, writer, and blogger, had lots of fun doing so.

The Chemistry Book: From Gunpowder to Graphene, 250 Milestones in the History of Chemistry is part of a series of books called the Sterling Milestones. Each book in the series (The Math Book, The Physics Book, The Biology Book, The Space Book, etc.) uses a similar format. The books generally consist of a series of chronological two-page spreads, each with a few hundred words devoted to a single chemical invention, topic, process, substance, or reaction, along with a striking image. To give you a feel for the period of time and topics addressed, early in the book he discusses investigations into mercury in the year 210 BC, and later discusses Robert Boyle’s seminal Sceptical Chymist (1661), the Erlenmeyer flask (1861), NMR (1961), and finally speculation around the future of hydrogen storage (2025).

The Chemistry Book. Find it at a library near you.

With such a vast array of topics, and a timeline stretching as far as it does, there is bound to be a certain generality about the book, but that’s both its main point and its strength. It may sound counter-intuitive, but it’s actually satisfying to read a well-written, knowledgeable account of apparently unconnected, but really important moments in chemistry in a seemingly random sequence. For example, jumping from the description of Linus Pauling writing The Nature of the Chemical Bond (1939), to an account of Neal Bartlett’s first Noble Gas Compound (1962), and then to the isolation of fluorine (1886) - which the notes at the bottom of each page suggest the reader follow - might seem somewhat illogical, but this technique allows a certain flow in the book that would be difficult to achieve otherwise.

It was while reading about Gibbs Free Energy (1876) that I tweeted the author (@DerekLowe). He responded by saying that entries like that one were the hardest to write in the relatively small number of words allocated, giving me some hope that my own wrestling matches with such material, and when struggling with explanations of similar concepts in class, are not necessarily entirely the result of my own shortcomings!

No matter. As a teacher of chemistry, one finds entry after entry that is both relevant and fascinating. For example, did you know that Fume Hoods (1934) only really became standardized and manufactured en masse in the 1930’s? Before that, just like the alchemists, chemists were choking their way through the day and resorting to simply opening the windows! What about the fact that, although Erich Armand Arthur Hückel published his paper on sigma and pi bonding theory (1931), his original rendering of the idea had been regarded as a little too mathematical to be accepted widely by organic chemists? Finally, what about Condy’s Fluid: any idea where that term originated? Well, under the heading of Oxidation States (1869), we learn that it was derived from the name that the English chemist Henry Bollmann Condy gave to a solution of potassium permanganate he marketed as a disinfectant. Titillating nuggets like those are scattered throughout The Chemistry Book, which are certain to amaze and delight the reader!

So what about the influence of such a book on my work? You may imagine that I’m sprinkling these fascinating facts throughout my teaching each and every day … but actually, that’s not really the case at all. I use these as sources of internal energy to remind myself of why I do what I do, and not as “inspirational carrots” for the kids. For me, constantly rekindling my own relationship with the subject is what helps me to rejuvenate my own practice each year — see my article about my experience at CHF — but for me it’s an internal, quiet gratification, not an effusive, overtly enthusiastic one.

So, I’ve written about two books here, and hopefully given a taste of their influence on me and what I do on a daily basis. If you choose to read either (or both) of them and get similar rewards, that would be great … but the bigger picture is far more important. Whatever your summer reading might be, make it about chemistry, and not about pedagogy. Why? Because the former will enhance and inform your practice more than the latter could ever do.

Adrian Dingle is a veteran chemistry educator and author who lives and teaches in Atlanta, GA. All that he does professionally can be viewed at his website, Adrian Dingle's Chemistry Pages. You can follow him on Twitter @adchempages.